Today we talked about sonnets in poetry class. A little poem, a little song. I had the chance to think again about what for me is one of the most perfectly beautiful of poems, 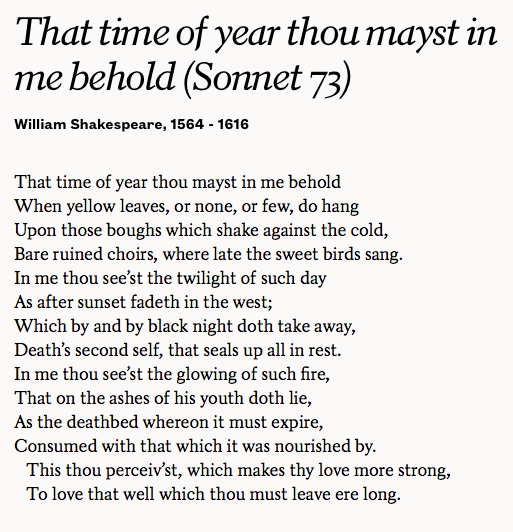 I love this poem for its beautiful iambic rhythms. I love it for the way it darkens, and for the beauty that the poet enkindles from that darkening. I love, even, the turn at the end to the poem's summation. The poem earns its summation, because of the beautiful way it has given embodiment to it in the previous twelve lines.

This poem is so much a paragon for me that sometimes I forget to read it all the way to its end, or even to its middle:


In me thou see'st the twilight of such day
As after sunset fadeth in the west;
Which by and by black night doth take away,
Death's second self, that seals up all in rest.

Today, two students presented about the sonnet. One of them read some of the most beautiful sonnets ever written as if they were poncey frilly things. There's something about this language and its decorum--its sharp keeping of a code--that can seem very old fashioned, I suppose, to very young people. Anyway, you don't get anywhere by holding that against them. You just have to demonstrate how to give yourself to that music, that very solemn and steady music, because sometimes, slow, deliberate, vivid and heartbreaking song is what's called for. It's the only thing whatsoever that will do.


To love that well which thou must leave ere long.

Email ThisBlogThis!Share to TwitterShare to FacebookShare to Pinterest
Labels: sonnets