He's more of a trip-hop kind of guy.

Phone conversation:
The historian: When you're not at home, I like to listen to jazz. With the volume up. But Bruiser really doesn't like it. Like today, I was listening to an old LP. Eddie "Lockjaw" Davis. Which is pretty great.
Me: (laughs: "Lockjaw." HA.)
Historian: He just gets up and goes outside.
Me: Not so much of a jazz fan, I guess.
Historian: I went out to check him--he was lying on his dog bed on the patio--and he looked up at me kind of shamefacedly. Like he thought I was punishing him.
In other news, the people, I am again in Idaho, this time with big writing plans. However much of these writing plans can fit into a three day container, we shall see. In the meantime, I have shuffled through a manuscript, using a writing compatriot's sage advice, and I have mapped out the official Big Writing Plan. If you happen to hear a lot of genius from up north (or from whatever direction Idaho is from where you are), that means things are going well, and therefore, bully for me. If, however, you hear no genius and on the other hand things seem a little sweaty, please just avert your eyes. Sometimes writing isn't very pretty.
Posted by Lisa B. at Saturday, July 31, 2010 5 comments:

A handful of decisions.

1. Some of my shorter skirts may be a bit too short. Alas. *
2. Purple faux suede shoes? Brown brogue-ish heels? Endless pairs of slightly uncomfortable ballet flats? Gone.**
3. I am willing to pay money for someone to make my window wells less dungeon-y.***
4. New dishwasher? New swamp cooler? Completely worth the money.
5. When you're feeling a little bit bereaved, it is completely okay to do whatever you want, as long as it's summer and you're pretty much letting no one down.****
*I can feel myself talking myself back into those skirts. As we speak. Maybe with tights, for instance.
**Although, since they are still stacked in my hall (as opposed to in and around my closet), maybe I'm speaking too soon?
***Calling all sons? or their friends? Cash money!
****i.e., wandering the aisles of stores and buying nothing; watching the end of Season 5 of Lost, then launching directly into Season 6; taking a nap; eating crackers and drinking iced tea.
Posted by Lisa B. at Thursday, July 29, 2010 5 comments:

1. watching ideas for writing flit into my mind and trickle out my other ear.
2. sorting stuff, and then throwing stuff away. Or giving stuff away.
3. admiring the new green and lavender paint in our bedroom.
4. eating popsicles and watermelon.
5. driving to and from Idaho.
6. having fun with grandchildren. And children.
7. wearing my vast assortment of white clothes.
8. eating cherries.
9. reading detective fiction.
10. watching Lost.
For the visually inclined: 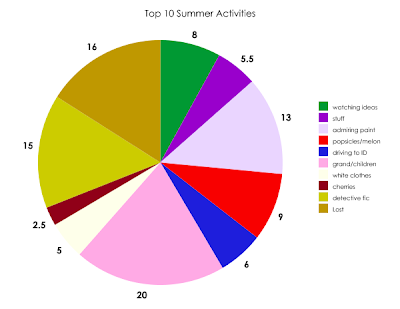 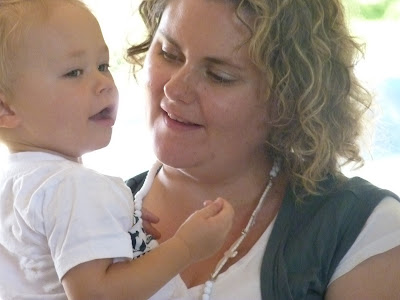 Where have you been? you ask. Well, thanks for asking. It has been awhile. When I clicked "New Post," the iMac of Power hesitated a little--"Contacting www.blogger.com," it said, as if trying to remember what Blogger even was. Have we met, Blogger? You look awfully familiar. 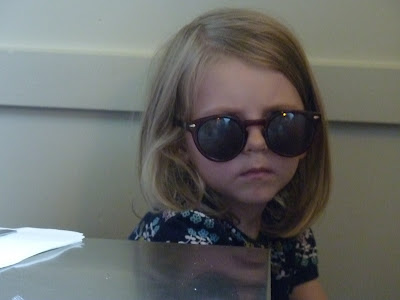 The Scotlands left yesterday afternoon, the dad of the lovely family first, then the mom and two girls. And by "the mom," I mean, of course, my daughter, and by "two girls," my granddaughters. Their leaving doesn't abolish the fun we had. But I keep thinking of that fun in elegiac terms. I am an elegist by nature, I guess. Can't help grieving. 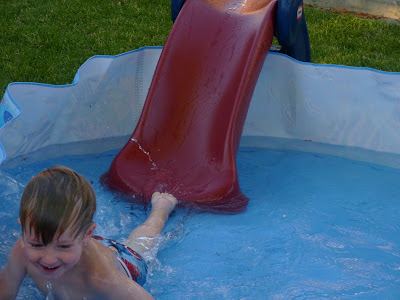 My middle daughter texted me yesterday: "Are you lonely? I sure am." The particular magic of this trip was that all the children--everyone here in Utah, and that's almost everyone, save my son the soccer coach--wanted to be with one another most of the time. It was mayhem and chaos and it was pretty much glorious. There were some quiet mornings, just us and the Scotlands, and a few quiet evenings; there were also more full-family dinners than I can count, some going out to lunches or the movies; some slip-n-sliding, some running through the sprinklers, lots of random imaginative games, story-reading, a few tantrums. A large-scale family hoopla, in other words. The full extravaganza. 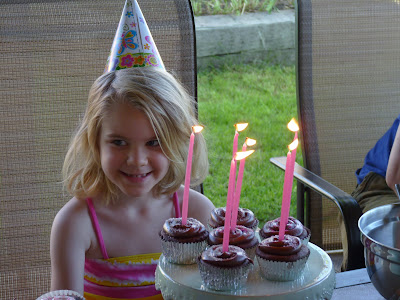 I went to sleep last night with sense of a palpable absence--no small girls sleeping in bunkbeds downstairs. And woke up this morning to the same. We'll all get used to it and get back to our routines. For now, this quiet just seems empty. Empty-ish.
Posted by Lisa B. at Monday, July 26, 2010 8 comments:

The meaning of July.

July, the fulcrum of summer, the point on which the delicate balance between delight and dread balances: each year at about this time, I can no longer banish the mathematics of summer, that accounting of what one has actually done divided by what one had originally hoped to do, the resulting figure indicating just how little time is left.
This accounting is, of course, happening, in some back corner of my brain. The numbers guy back there is using an abacus, probably, and also is smoking a rank cigar. The faint curl of smoke you can detect in a certain light, coming out my ears? That's him, all right. He will not let me forget.
However, since the arrival of the Scotland Contingent, with its retinue of granddaughters, the capacious front rooms of my brain are filled with popsicles and sprinklers, bathing suits, going to the park, story-reading and drawings and sweeties and cousins and grandsons, parties and magic. And in a snug downstairs bedroom of my house (and also my brain), two little girls are sleeping, one with a bunny, the other with a bear. And tomorrow, we will pile into cars and motor on up to Idaho, so that we can all do a little river magic together this summer.
What I'm suggesting is that at the moment, the big overstuffed life I lead is allowing me to ignore my grouchy accountant. I know I will have to talk to him sooner or later. But right now, there are a highway, several dinner parties, a bundle of rivers, hopefully some wildlife, and lots of watercolors, paper dolls, chocolate, cookies and wildflowers between us. Later is way better than sooner to settle the accounts. In the meantime, hooray for July!
Posted by Lisa B. at Thursday, July 08, 2010 4 comments:

Ladies and gentlemen of the jury, today I looked into the abyss that is my soul and was a little terrified by what I saw there. Which is to say, my daughter came over and helped me clean my kitchen. I had already done a once over and a twice over and was congratulating myself a little bit on how spiffy certain areas of my kitchen were looking. But my daughter does not believe in congratulating yourself on a clean (-ish) counter when there is the devil behind your cupboard doors. And by "the devil," I mean pretty much everything about the way I carry out my daily kitchen affairs.
Let's take, as just one example, my candle situation. I had, in the way of candles, many a votive, tea-light, pillar, and taper. I also had a half-burnt candle in the shape of an evergreen tree. Well, half of an evergreen tree. As you might surmise, this candle was a Christmas purchase. I had not actually set eyes on this candle in at least a couple of years. At least! Moreover, I also had candles that were set into pieces of bamboo, or maybe simulacra of pieces of bamboo. These I had purchased when this same daughter got married, for a party along a luau theme. Which was about five years ago. Literally, the last time these candles cast flame, it was five years ago. The world was younger then, and probably my cupboards were just as messy.
My daughter held up a lone little votive candle. I sobbed a little. She held it ever more firmly for my inspection. My shoulders sagged.
"Okay." I said.
"Good girl," she said.
This went on and on. There are many categories of kitchen items that were culled, sifted, and within those categories, many items weighed in the balance and found wanting. It was a veritable Day of Judgement at my house. Many were the colanders, old hand mixers, sandwich makers, electric kettles, ancient food items, spent tins of spice, and bad tea choices that were cast into the fiery pit, aka the garbage bin or the Goodwill bag.
Each and every cupboard and drawer is now organized, spare, and sparkling. I am chastened. My daughter is something of a champion--something like Jesus driving the moneychangers from the temple, but with kitchen dirt and stuff as the moneychangers, and my kitchen as the ancient temple. Well, now it's a temple.
And in two days, there will be visitors from Scotland at my house. I dare them to mess my kitchen up.
Posted by Lisa B. at Monday, July 05, 2010 9 comments:

Email ThisBlogThis!Share to TwitterShare to FacebookShare to Pinterest
Labels: daughters, organization, sorting, what's in the kitchen? 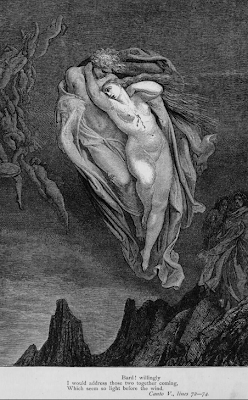 It is too hot. It is also too windy. Windy + hot equals horrible. It is so hot, I literally can't think. Moreover, even though I just this very moment told myself that it's lame to whine about the weather, I am helpless. I can't stop myself from whining about the weather. I know, I have whined about the weather on this blog about a million times. That picture--it's a plate from Inferno, and I've already made that reference on this blog as well. Couldn't I write something thrilling and original instead? like a poem or an essay or movie? or maybe read a book or something. Nope, all I got is: ugh, hot. And windy.
Okay, I am officially pulling it together now. Today, I did do some cleaning and organizing, which necessitated a prior trip to Target. A shockingly expensive trip to Target, it must be said, the result of which was the purchase of some plastic storage bins, potato chips, cleaning supplies, and other inconsequential whatnot, as far as I can tell. That stuff apparently adds up.
I exited the Target with my cart laden with all of the above and some miscellaneous other things, and drifted about the parking lot like a tumbleweed. Or maybe like Paolo/Francesca from Inferno or something like that. I flung myself from the car to the front porch, dragged in my goods, and hastened down the stairs, where it is kind of naturally cool (also: icy in the winter--I should work on remembering that the frigidity of January is but a foretaste of the cool refuge of July). And as long as I stay downstairs, I am semi-functional. Fortuitously, the cool downstairs happens to be where there is a bunch of organizing and cleaning to be done. I'm lucky like that.
Posted by Lisa B. at Thursday, July 01, 2010 6 comments: