If you have, say, twelve videos to remake, by replacing sneakily screen-grabbed visuals with legit Creative Commons-licensed ones, and re-recording the voiceovers, and maybe making the overall content a little more substantial while you're at it, and also adding captions--


(damn if that's not a long if clause)

--to repeat: if the above are the conditions under which you decide that by god you're going to get some of those videos DONE, son, it does not follow that you should start four at the same time.

Because you're probably not going to finish any of them, and then you're going to feel panicky for days.

I'm not complaining. But this weather, it might actually be a little too cold for the middle of September.

Days are not infinitely elastic. Poems are acting like strangers.

And here I thought I had less to do, and I still have lots. Lots and lots.

I sometimes feel like I've said all the things there are to say on a blog. Just a feeling, not a fact, although it sometimes feels like a fact.

This afternoon as we walked in the chill, before the sun went down, the light and air were perfect.

There's been a cold snap, as they say. It was gray and legitimately chilly today.

Me:  It's definitely cold enough for tights, except for my rule.

The historian:  What's that, again?

Me:  Once you wear tights, no more bare legs.

The historian:  I see.

Me:  ....and the reverse in the spring--once you wear bare legs, no more tights.

The historian: I saw a couple of young women today on campus--they were wearing tights.

Me:  It's like my personal "no white after Labor Day" rule.

The historian: And my rule is "wear shorts for as long as possible."

1. The moon. I know, I know. It's there every night. But my friends, the moon is particularly beautiful right now. Right this moment. In fact, just go outside.  Isn't it amazing?

2. Loving the chill. I woke up this morning and my room felt the way it always does--like morning, which is too early, and full of sleep, which should last longer. You know, like a bedroom. But I had gone to bed in the belief that today would be a decidedly colder day, and I dressed accordingly, i.e., with a sweater.  And the people, I was not disappointed. When I went outside, the morning had a distinctly sweater-appropriate vibe, i.e., it was a little chilly. And even when the day warmed up a bit, that cardigan did not go amiss. And tonight, after dinner, I went out to take an early evening walk as if my life depended on it. And oh, the sky. The chill. The way the air felt on the verge of something colder. The moon on the rise. We have weeks and weeks of this kind of weather ahead, if we are lucky, and I intend to embrace it with my whole fall-loving, leaf-stomping, sleeping-with-more-covers, soup-eating heart.

3. Television. Listen. If I were being honest, I would have put that another way: TELEVISION. Or even TELEVISION! Because television is the best. It's time for the new shows, you know. The very first new shows! Bonus: they're also showing the last episodes of last season, so you can revisit your old friends.

This summer we watched three seasons of Justified and we watched it so hard that at the moment, I find it hard not to wonder what Raylan Givens and Boyd Crowder are up to these days. So yes, television, I am recommending it to you. So hard!

4. Sudden and spontaneous baking. Tonight, I was seized with the desire to eat cookies. Oatmeal cookies. So in the commercial breaks of the last episode of last season's Nashville, which I totally had not watched and thus watched with full attention and television tears, I beat sugar into butter and then an egg and vanilla into that, and then oats and flour and salt into that, and then chopped up dried strawberries and chopped up pecans into that. And thus it was that I found myself, tear-stained and emotional, pulling a pan of cookies out of the oven (375 degrees). Those cookies were so good. I kind of felt like a genius, which leads me to my point: eating cookies soothes the savage beast, y'all. Bonus: at the moment, it's not too hot to turn on the oven.
Posted by Lisa B. at Wednesday, September 18, 2013 5 comments:

Email ThisBlogThis!Share to TwitterShare to FacebookShare to Pinterest
Labels: recommendations

The wind in the trees.

I've been working at home today. When I woke and checked the weather, it said warm. And then: cold. A sudden cold snap, I thought to myself, hopefully. "We're going to have a cold snap tomorrow," I said to the historian.

This morning, I was Skyping with a student who lives in Minnesota, and who had not accounted for the time change when she made her appointment, but we caught up with each other nonetheless. Like the every oldening person I am becoming, I asked her about the weather: 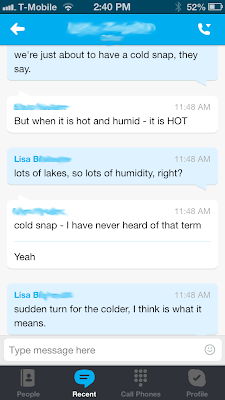 Yes, I may also be using terms from olden days, like whippersnapper and skedaddle and lickety split and cold snap. But I am counting on it. I am counting on the cold to arrive and to--with a plus or minus of a few degrees fahrenheit--stay. To snap, and then linger. To be here now, for good.

At breakfast time, I stood in the doorway from my kitchen to the patio, toast and strawberries in hand. The wind sounded gusty. It wasn't cold, but it was noisy. Windy, in point of fact. Enough so that I stepped back inside, to read the paper while eating. The door stayed open. There was a discourse between the still kitchen and the blustery backyard, but I was in and the bluster was out, and that's the way it had to be.

Warm, but with a prophesying wind. Sunny, but with prognosticating clouds. 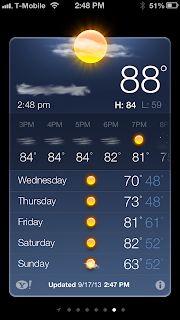 Autumnal-ish, in a word (plus suffix, which means imprecisely):

ALERT there are bees in my kitchen.

Or something like bees. Two of them, to be precise. Plural: bees.

Why? Because I am chopping mint and making tabbouleh? Or because there was sugar out for the pie?

Bees, like spiders and moths, do not belong in the house, in my opinion. And mice. Bees, spiders, moths, and mice all belong in the out of doors where there will actually be more opportunities for them. Or, fewer opportunities. I am, actually, stony and hard of heart on the subject of bees, spiders, moths, and mice. Circle of life, my friends, circle of life.

[note: I do want there to be bees in the world. I am not without mercy. I am not killing the bees. But I can't believe that the two bees in my kitchen are actually doing the bee-world any favors. The future of bees cannot lie in hanging around my kitchen while I chop mint. That just wouldn't be sustainable.]

All I'm saying is that I was making tabbouleh, but the bees have forced a retreat. As in, I cannot be in the kitchen, tabbouleh, mint, pie or no, if there are also bees, end of story.

America: keep your bees outside, with the flowers and trees and heat and dirt and wasps and, hopefully, spiders, moths, and mice. I need to add the mint, parsley, red onion, garlic, salt and pepper to the tabbouleh, stat! It's like a Mexican standoff up in here, with the two bees and their stingers and me with my scaredy-cat ways.

On cleaning out my office, in preparation for the big move to the new building:

1. If you put stuff in a box, and then you don't look at the box for one year or more, throw away the contents of the box, preferably without looking at each individual paper.

2. Magazines and newspapers = stuff to recycles. Why did you stack this on your shelves in the first place?

3. No need for self-loathing, now.

5. Just get rid of it in the first place, for heaven's sake.

It is hot. This cannot be denied. But the weather is changeable in September. Today's high of 93 will turn into Saturday's high of 88. And then, as a colleague just pointed out, soon it will be snowing. We live in hope.

On things to look forward to:

New The Mindy Project! New The New Girl! Two Scandinavian novels awaiting me. More and more tomatoes and basil and squash and peppers. Soon: sweaters. And tights! A whole slew of great movies now and to come. Going to visit my daughter. A trip with my son and another daughter. A trip north in October. A solid revision of my (second) manuscript.

So many of them: Walking every night with the dog. Watching television with the dog. Taking a walk with my tiny little shuffle, music in my ears. Watching the sky. Autumn dreaming. Sleeping with the window open. Feeling, actually, optimism.
Posted by Lisa B. at Thursday, September 05, 2013 5 comments: