Away, and yet I am still my very own self, Episode Infinity.


I am in a hotel in another city. Okay, D.C. It’s early, because even in another time zone in my own country, I’m a little bit thrown off. I heard what seemed like a knock at my door and I thought, ack I’ve overslept, which is a new “thing I’m doing,” I guess, part of the “everything has changed and probably for the worse” tour of my own life. But no, I had not overslept, there was no knock, it was still early. But, you know, the windows are light, or lightening, and so now I’m up in the gray quiet, alone. 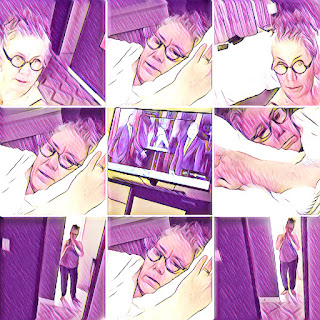 What is there to do in a hotel room but take gratuitous selfies? Or blog, which maybe amounts to the same thing?

I told my friend that I would have a hotel room to myself: 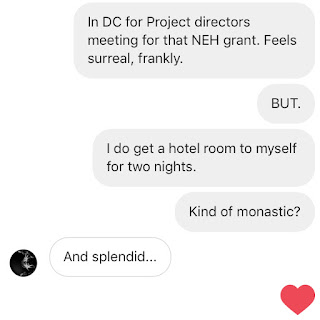 I realized when I woke up that I had just spent the last 12 hours, almost, in the total quiet, my time belonging only to myself. And what did I do with this precious commodity, quiet and time alone? Well, I slept, of course. But also, I did much of what I always do—finding stuff on the internet. Answering email. Because I tried to leave town with lots of work already done, though, I didn’t find myself feeling torn by how much there was to do. When you’re in another city, a lot of what you usually have to do, you can’t do. My colleague and I ate a wonderful dinner before I encelled myself in my narrow chamber. Actually, it’s pretty swank. So, you know, monastic, but with really nice towels and a king size bed.

Dear guy in the white Ford ahead of me at the Del Taco drive thru,

Dear guy in the white Ford ahead of me at the Del Taco drive thru,

I've lately been having a talk with myself about anger. About rage, really. About grief and rage, which are twins, obverse and reverse of the same coin, aren't they? I could say that my grief/rage is national, but really, it's international and national and local and personal. Things are messed up. They are awry, askew, they are going sour and turning violent, and the losses--psychic, human, animal, civic--are at this point past counting.

Yes, I thought about all these things as I watched your broad backside, white Ford ahead of me in the Del Taco drive thru, brake lights aflare, as the driver--that's you, guy in the white Ford--leaned on an elbow out the window, apparently having a tete a tete with the person whose voice I could faintly hear through my own window, as I waited to order my two fish tacos and a Diet Coke.

What could you have been discussing? On NPR, they were discussing whether the Las Vegas shooter was somehow affiliated with the Islamic State, which the Islamic State claimed he was. Could he have acted on his own, and Islamic State still somehow claim it, in some legitimate sense? What is a legitimate claim from Islamic State, vis a vis this particular crime? &c &c &c, and the brake lights were still lit up and you, guy in the white Ford, still leaned out your window, and you were still, apparently, talking about something taco or burrito related? What could this be?

I admit I felt a tiny ignition of anger. I was under a time crunch, you see, a meeting that was to begin in fifteen minutes, and those fish tacos weren't going to eat themselves.

Finally, finally, you inched ahead in tiny, infinitesimal inches. And, following you, I crept forward to the drive thru kiosk to say, Two fish tacos and a diet Coke, and Del Scorcho. Because they always want to know if you want sauce, and Del Scorcho is what my son once ordered, ergo: Del Scorcho is my sauce.

I raced into my building, sack of tacos in one hand and the Diet Coke in the other. I managed one bite of one taco before I dashed to my meeting.

And now, having wolfed my tacos like a wolf, I'm thinking to myself: what could you have been discussing at the drive thru ordering kiosk, facing that tinny little speaker as if it were the person speaking through it? Was yours a terribly complicated order? Did you find yourself in need of a rundown of all the possible sauces? Were you ordering for a starving militia? Who are you, guy in the white Ford ahead of me in the Del Taco drive thru? And what hunger brought you to this drive thru, where you tarried, and, let's face it, kind of messed with my crack timing?

But that's okay, because I don't have a rage/grief problem, so we're cool,

Remember when everyone had a blog?

Well, I remember all of this. Mostly because all of it happened to me, but you can substitute your own events, and you'll, all of a sudden, remember when you were younger, too. And when you blogged, maybe. Well, maybe you never blogged, but I did. I blogged a lot. There were a couple of years when I blogged almost every day.

I'm in my office, and I should do a little grading before 11 a.m., when I have a commitment. So I will, but before I do so, I want you to know that I have the following before me:

With everything happening in the world, I want to try--try--to keep choosing love, beauty, and joy, while also still flooding my congresspeople's offices with strongly worded faxes. I want to try.