Crying at the movies: a memoir.

Last night, after my birthday movie, I came home to find myself tagged in this post on my son's wall: 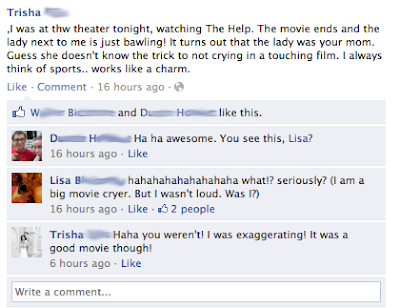 "It turns out the lady was your mom." I will pause so that you may reflect.

Well, I do have a long and storied career as a movie cryer. Here are a few movies I have sobbed like a motherless child at:
I have also cried like crazy at indie movies, such as:
and probably a whole bunch more that I may or may not care to mention. The Sex and the City movie, for instance, after Mr. Big stands Carrie up, sort of, at their wedding and she looks so miserable. Or, like, parts of Superbad, which the relevant youngest son pointed out to me wasn't remotely poignant to him. Or Into the Wild, with director Sean Penn pulling the cry-now strings like mad.

My kids like to say that I cried at a Rugrats movie, and maybe at a Pokemon movie. I don't know. I'd like to see their evidence--we all know from about a billion Law & Orders that eyewitness accounts are notoriously unreliable. But I will not deny that if a movie tugs at my heartstrings, I am generally happy to oblige, although sometimes if movies are trying to work me, I resist. I'm not that easy. Okay, I am. But sometimes the weep machinery is just too much, and in those circumstances, I stay dry-eyed.

Usually, though, I cry. And I don't particularly care. So what? Why bother to think of sports? I used to cry a lot about life-y things, and sometimes I still do. But these days, I just don't like it--it makes me feel bad, and my eyes get puffy, and it's all just too tragic. At a movie, though: crying at a movie lets you release feelings that need to be released (see: catharsis), but mostly in a limited, self-contained way. I don't usually cry too much (except for at Marley & Me, and Stepmom, and Terms of Endearment--I wept so much in those movies I had to take to my bed afterward to recover. And if one of them comes on on cable--forgetaboutit.), but frankly, it feels a little bit cleansing.

Anyway. In July, a bunch of people, including my daughters and me, went to see the most recent Harry Potter, I pretty much full-on sobbed when (seriously? you haven't seen/read it yet? what is wrong with you? spoiler alert) Snape died. After the movie ended, my daughter with the wicked wit said, "Are you okay?"

Email ThisBlogThis!Share to TwitterShare to FacebookShare to Pinterest
Labels: birthday

As Monday abolishes the weekend.

This weekend we saw Our Idiot Brother, which was charming and delightful. We enjoyed it very much. We bought peaches and tomatoes and onions and eggs and bread and beans and squash and grapes at the market. I ate a lot of watermelon. I just can't get enough watermelon. We also bought the most beautiful berry threesome: a basket each of blueberries, raspberries and strawberries. We went down to Utah Valley for a family gathering. I finished my Swedish thriller. I read a manuscript for the press I'm on the editorial board of (nice prepositional ending, eh?). Took Bruiser for several walks. Commented on the initial posts in my online classes. Watched two episodes of the old Adult Swim show Home Movies (streaming now on Netflix, highly recommended). Talked with running son, who jumped back into Utah life this past Thursday, surprising me in my office with a bag of Lays Classic Potato Chips. Read the New York Times sitting at the table under the cherry tree. Listened to a big cracking thunder and lightning storm last night.

Today, I have been in my office interviewing editorial candidates for Folio. And while I confess I wish the unstructured, wander-where-you-will qualities of summer, which often eluded me during the actual time I was off work, would last a bit longer, it's been kind of nice to listen to these potential editors talk about their ideas, their plans, their enthusiasms. The show-up-on-time qualities of fall are pretty good, too.
Posted by Lisa B. at Monday, August 29, 2011 2 comments:

The last day of summer, technically: an FAQ.

Q: How's that prep coming?
A: Oh, swell, thanks for asking.

Q: Seriously.
A: None of your business.

Q: What'd you do today, the last day before school meetings start tomorrow morning?
A: Would you like that in a paragraph, or a bulleted list?

Q: Bulleted list, please.
A: Excellent choice:
Why, what'd you do?

Q: How on earth will you be ready when classes start on Wednesday? Don't you have long meetings tomorrow?
A: What's a long meeting and a laptop for?
Posted by Lisa B. at Monday, August 22, 2011 4 comments:

Email ThisBlogThis!Share to TwitterShare to FacebookShare to Pinterest
Labels: good day, grandchildren, I am a campus unto myself

Nectarines: 3 exorbitantly priced ones, from our fruit guy, who has a very high opinion of his fruit in general, and his nectarines in specific.

Movies: 1, unless you count watching A Few Good Men on AMC for the zillionth time, in which case: 2. Wait! also significant portions of The Misfits on TCM, because it was Montgomery Clift day, which we watched while laying around this afternoon and also reading portions of a Swedish mystery novel.

Pants purchased on sale at the Gap: 4 pair, cute if I do say so myself.

Successful technology challenge sorted: new charger for my Macbook Pro, which was (I bet you can guess this:) failing to charge.

Dollars spent to sort technology challenge: 0. That is "zero." That's because of the brilliant Apple Store Genius, Tomasi, who figured out, I guess, that my charger was still warrantied, or something? Anyway, Tomasi was awesome. Tomasi is a solutions provider.

Syllabi finished, worked on, or started: 0. That is also "zero." I have no further comment to make on this point.

Fantastic culinary adventures: 1. I made harissa, to go with roasted potatoes omg it was aMAzing. It was for my poetry group.

Birthday girls who ate pancakes with us: 2. At Dee's! --a brief panegyric on Dee's: unpretentious; full of cheerful folk but still with a table to be had, without any waiting whatsoever; with the best hash browns I've had in quite some time, and, judging from the several bits I stole from one birthday girl's chocolate chip pancakes, with an excellent chocolate chip pancake.

It was certainly our own fault that we chose One Day as our Friday night movie option. However, having now viewed this film, we have the following constructive criticisms to make, in the spirit of better movies for everyone:

1. You should hire somebody who can tell you how to make a movie better, because pretty much any fool could have told you what you should have done to make One Day a better movie.

I think it is healthy, salutary, to pause at the end of something to assess what one has accomplished. What one has learned, if you will. And it is in this spirit of self-assessment that I offer firstly a consideration of what I thought I might accomplish this summer; secondly an enumeration of what I did indeed accomplish this summer; and thirdly, a reflection upon what the two data sets, compared, might reveal.

Firstly. I said I would make movies, write poems, revise a couple of manuscripts. I said I would "Gather my wits and be the happy genius of my house" and that I would lay "hands upon a will, a desire to start again, an urge from which I will not be diverted." I also had ancillary plans to organize and order my house.

SECONDLY. What follows is a detailed but not complete listing of my accomplishments since I turned in my grades in May:
finally....

I have found the recurrent cycling in and out of my house of my youngest two children to be more of an emotional event than I would have predicted. Or maybe that's not true. Maybe I really expected it, but it has still hit me hard. I miss them, and I know that missing them is no tragedy, rather a necessary step that comes before whatever's next. Still.

Even so, one of the great pleasures for me--and one of the most meaningful--was to have spent that time with my daughter. I did not expect it, but I will remember this summer as the summer my daughter left, and before she did, she lived here, we talked every day, we ate together, we watched endless episodes of Criminal Minds because it is her current favorite show. I loved that. I am still watching it, because it makes me feel connected to her.

I am still finding my way back to writing--the act of writing. My friend Renaissance Girl says that everything, for a writer, is writing--walking out in the green world, thinking about things, mourning them. And I think she is right. I would like, though, to be back at making the things. This last week, I have been collecting notes for a couple new poems. I think they are poems. I'm going to try to make them into poems. We'll see.

The lack of blog in the last several months--the paucity of posts, certainly, but also a failure of delight in making them--is indicative of something, and I want to see if I can do something about it.

One day--the day after I had finally articulated my own depletion to myself--I said, aloud, to myself whilst walking the dog, Just be happy. Why not just be happy? And this sort of seemed like an answer. For awhile, anyway. I just want to assert my words, my little words, into the world. Just let them have their say, let them work their way to the surface, let them become these statements, poems, whatever. I want to keep trying.

Email ThisBlogThis!Share to TwitterShare to FacebookShare to Pinterest
Labels: self-assessment

Tomorrow morning, my daughter is leaving. 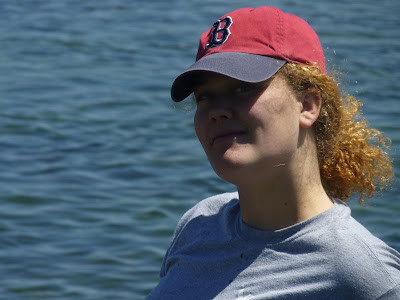 She had to find a home for her bunny. 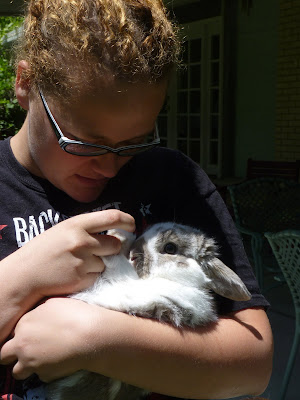 This summer we've had colts in the back field. 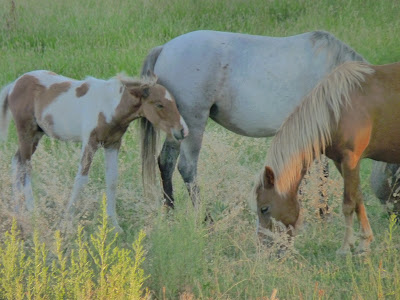 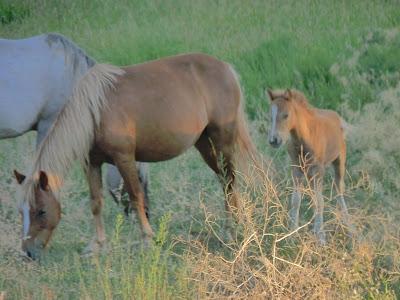 We had a party to see her off. 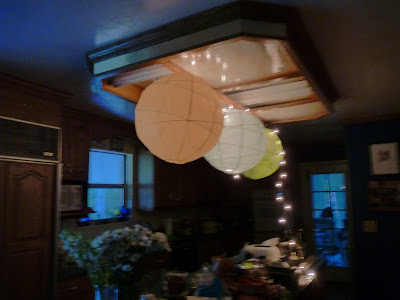