And on the Sabbath day, 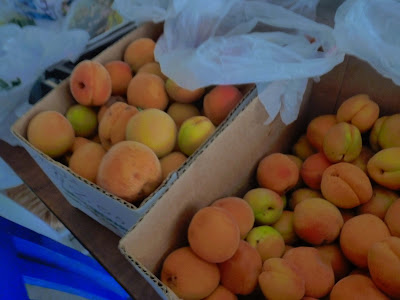 I made jam, because it was apricot day at the market yesterday. It might be apricot day again next week, but you can never tell, really, so it's good to seize the day. 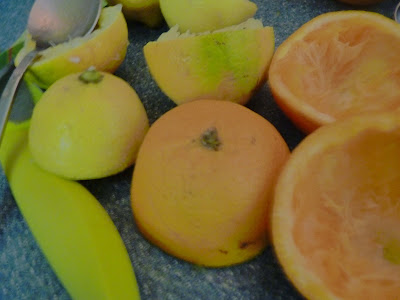 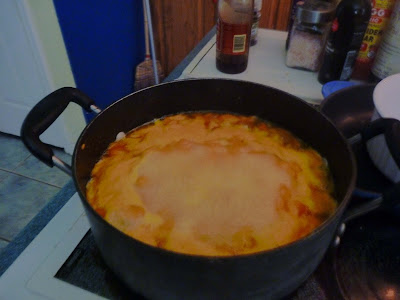 It's half a lug of apricots, about 2 c. of sugar, juice of 2 oranges and 3 lemons. Bubbling away. 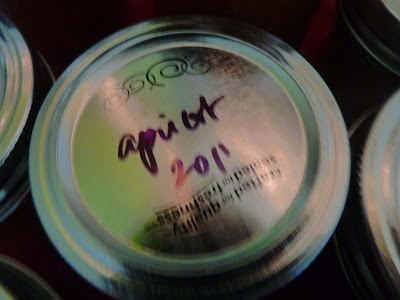 Sharpies were made to label jam jars. True story. 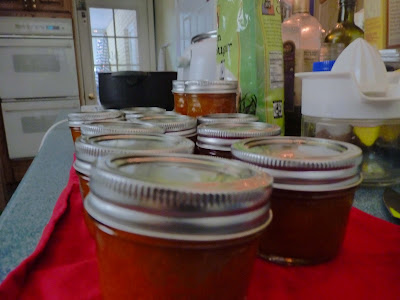 So this is about 2 half pints and 10 little quarter pint jars. I might give one to you if I really like you.
After the jamming--which will continue into tomorrow after I buy more lids and rings and probably more jars--I had plenty of apricots left to make a blackberry apricot galette. The blackberries were because yesterday, it was also blackberry day at the market.

Email ThisBlogThis!Share to TwitterShare to FacebookShare to Pinterest
Labels: fruits of our labors, pie, Sunday

My washing machine did heal itself. Apparently, it just needed a little break from its job, much like the rest of us do. Shortly after I posted yesterday, and after I had tentatively switched a few breakers on and off like I knew what I was doing, which I patently did not, the washing machine drained itself and went into the rinse-and-spin cycles. Like the champ that it is.
Now, if my household would just
then I would
I don't think that's too much to ask.
Posted by Lisa B. at Friday, July 29, 2011 3 comments:

Today, a day mostly at home, I washed clothes until I (apparently) broke my washing machine; washed dishes; made bread; made dinner; contemplated my own poetic project as well as my poetic means until I felt a little dizzy; walked the Bruiser; felt just fine.
A day mostly at home is pretty swell. But I wish my washing machine would spontaneously heal itself.
Posted by Lisa B. at Thursday, July 28, 2011 4 comments:

After a long walk, we arrive at the water's edge.

Early in the evening.

Fields of wildflowers on the mountain.

Awhile ago, when my daughter decided what day would be her very last day of work as a manager of sandwich artists, we planned a trip to Idaho, her last before pressing the eject button on her Utah life, landing in Louisiana for her shiny new full-of-possibilities life. I checked to see if the other kids and grandkids could come, too. They could, but a day or two later than her possible dates.
Then a brilliant thought occurred to me: what if she and I drove up a day or two early with the oldest two grandsons? Then their parents and the historian could join us, after we'd had this small adventure. All agreed to this splendid plan.
So this morning, my daughter and I scurried around: she cleaned out her rabbit's quarters. I wrapped a birthday gift for a soon-to-be seven-year-old who lives in Scotland. I packed, she went to buy rabbit food and mail the package. I gathered together a bunch of comestibles. We picked up one grandson. His mother affixed his car seat into our car; we stashed his little suitcase and plush puppy. We drove to the other grandson's house across the valley. Car seat, back pack, Spiderman action figure. A quick trip through the Wendy's drive-thru, then we were on our way.
The boys chatted back and forth to one another, occasionally exchanging toys (good sharing, boys!). We talked about where we were going and what we would do there. Along the way we pointed out horses, cows, farms, motorcycles, trucks, lakes (reservoirs), the huge sprinkler pipes in the fields. We stopped in Malad for a bathroom-and-snack break. In Ashton we bought some sundry groceries to add to the mountains of food in the trunk. In the grocery store, the boys made a break for it after hours in the car; we raced after their shrieks, collected them and had our only stern--brief--moment of the day.
When we arrived, I showed the boys how to turn the water to the cabin on. We took out the store of antique toys to play with. We ate dinner, we walked over to the park, we gave the swings a whirl. My daughter and I served as regulators of the teeter totter.
When it was time for bed, we took the boys upstairs. They hadn't slept all day, and they were both tired. With the smallest of protests, each nestled into his bed. The younger, Will, said, "I want my mom and dad." I told him that for tonight, it would be just us--his aunt, his grandma, his cousin, and himself--and in about a minute, his breath slowed, evened. Asleep with the plush puppy in his arms.
Posted by Lisa B. at Wednesday, July 20, 2011 5 comments:

Having my daughter home for a few weeks before she launches into a big brand-new adventure.
Cherries in the fridge. Iced tea morning noon and night. Lemonade. Toast.
AC in the afternoon. The breeze sifting through the trees in the morning. Windchimes. Sitting on the patio for an hour or two, writing.
A beautiful, big, wonderful dog who wants to go on a walk, morning noon and night, and who greets us at the door with a whole-body wag.
Realizing that I have the doldrums every single summer at the exact same time, a realization which allows me to mitigate it, even if a little, even just by writing a list of the good things.
Writing, always. Always.
An old friend, a new friend, the oldest friend.
Daughters and sons, hither and yon.
The beautiful, loyal, funny and smart historian, who is always on my side.
Posted by Lisa B. at Monday, July 18, 2011 4 comments:

Open letter to my depletion.

Dear My Depletion,
Did you happen to know that I lost my agenda when we got back from Idaho? --by "agenda", I mean my actual, physical calendar, but now that you mention it, the word could refer to the figurative thing as well.
This past week was crowded: with dinners and breakfasts and lunches, LMS trainings, focus group meeting, writing group, date nights and family Harry Potter, shopping and movies. All of these appointments and their various delights I kept in the agenda of my brain, because the actual calendar was gone. Often, My Depletion, the calendar and its busy agenda are harbinger, the very symbol of you. This week, however, you hummed in the background of all these events and reminded me:
you are not writing
summer is almost over
you are not writing
something is so very wrong with you
I literally hate your song, My Depletion. But I have not been able to come up with a substitute.
I have notes on slips of paper, that say things like "Monday: house stuff! film." or "T: write 500 words." And who knows? Maybe Monday or Tuesday--maybe Monday and Tuesday--will be the days I hop out of bed and take Bruiser for a walk when the morning is still cool, and say pish to the internet, whip out my sewing machine or catalog my film clips or even write 500 words! I can see, theoretically, that this is possible. Saying so, maybe, makes it more likely to be so.
But nothing like this will occur unless--it must be said, My Depletion--you stop humming that goddamned song. It is getting on my last nerve.
Sincerely,
htms
Posted by Lisa B. at Sunday, July 17, 2011 3 comments:

Well,
After getting back from Idaho on Saturday, and on Monday having the Fourth of July barbecue at my daughter's (fun!), and on Tuesday, having a haircut and a meeting and some hours writing a little bit strenuously and sweatily and not very attractively, I'm telling you, and then seeing a movie and meeting with my book group (fun!),
I have settled into the following routine: 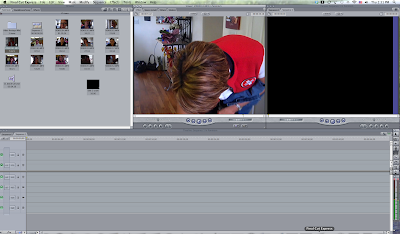 It's not very productive, I am forced to admit. I am "writing" and "making a film," but the measurable outcome is infinitessimal. Like, for instance, if someone were making a documentary of my summer writing/filmmaking, and they did time-lapse photography, maybe over the course of several days you might see a half of a haiku emerge.
Not really. It's more like a big messy spill of bleah, out of which might be excavated a haiku. But no one really wants to see time-lapse photography of that, do they? Or do they? I wish, maybe, I could make that movie.
Or not.
Actually, I am reasonably happy making the movie I'm making. It has lots of parts to it, and many pieces of footage, and decisions to make about what goes where, and what I should say in my voiceover, and so forth. So away I go, to look at the footage some more and take a few more notes and maybe write the other half of that metaphorical haiku. Or maybe just a half of the other half. I don't want to rush it.
In case you're interested, I am making salad for dinner. And toast. Because now there is bread, which around here, we like to call "progress."
Posted by Lisa B. at Thursday, July 07, 2011 7 comments:

Email ThisBlogThis!Share to TwitterShare to FacebookShare to Pinterest
Labels: in progress, just a movie, lazy, overlooked salad, slow, with bread

More evidence that I am a holiday-hating crank: ugh, fireworks. Unless I can watch them without any effort on my part, to wit: driving to a giant park; parking in a giant parking lot; hanging out with the humanity while we wait FOREVER for the fireworks to start; watching the fireworks (the good part, for sure--I totally concede this); gathering up your damp blanket and your whatnot and surging, slowly, with the humanity toward the exits; finding your car; getting into your car and burning up fossil fuel FOREVER while everyone else exits before you; getting home exhausted.

The best recent fireworks happened up in Idaho the last couple of years, where we basically drove two minutes down the road, sat on a blanket on top of sagebrush while the owners of the Grub Stake Market put on a swell fireworks show across Highway 20. There was no "Proud to be an American" hoo-ha, just lots of light and gunpowder drift and so forth, oohing and aaahing from both sides of the road, and when it was over, we drove two minutes back home. It was awesome. Basically, all the good parts and almost none of the grouchy parts.

But hey! We're having a BBQ at my daughter's house, so that will be great. And here's a photo of the Idaho fireworks from last year: 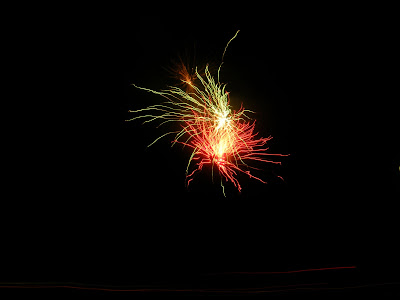 
And in conclusion, some American things I love: the Gettysburg Address; Frederick Douglass's autobiography; the Declaration of Independence; blueberries; watermelon; ice cream; Title IX; basketball; the movies; hot dogs (don't get me started); Target; Yellowstone; the great rivers of the West; the Idaho bluebird and the Western tanager; community colleges (for real); my whole dang family; and the persistent hope, however slim, of the electoral process.

Happy Fourth, everyone, however you celebrate.