Now that Christmas, and also the day after Christmas, are over, I thought I'd offer a brief summation. First of all, there was shopping, which I accomplished with shocking efficiency (years of practice). Then there was decorating. You'll be pleased to know that this year, I bought a Christmas tree on December 18, as opposed to the hellish search I undertook for a tree when I tried to buy one last year on December 22. This year, it was all Fred Meyer, "I'll take this one, please," and it was 30% off.

Then there was baking. I delivered goodies to a dozen people. Bruiser ate an entire plate of cookies when we were out of the house for an hour. Merry Christmas, Bruiser.

Finally, there was entertaining. Because of the diplomatic entourage from the United Kingdom, we had to have a reception for the fam (25 or so people eating soup, chili, salad, and bread). This happened the same day we bought the tree. Actually, it was good we had the party, because I didn't want to start any Christmas activity until I finished my grades, but because of the Scottish invasion, I was procrastinating like nobody's business. If we hadn't had the party, we might not have had Christmas at all. As it was, I finished my grades just a couple of days late, but who's counting.

We also had a Boxing Day party, another 25 people or so, this time eating a gigantic feast, which included killing the fatted calf (i.e., cooking a big piece of meat, which I do once a year for this occasion) and all manner of delicious foodstuffs, including apple tarts and homemade vanilla ice cream for dessert, thanks to my handy countertop ice cream maker.

Today, I spent the entire day doing just about nothing. I read about two and a half beautifully written pages of Jonathan Lethem's The Fortress of Solitude before I fell asleep at 10:30 a.m., waking up again at 1 p.m. I staggered into the kitchen and reheated some Indian food, then hung up some clothes that had been laying around since before Christmas. This necessitated another lie-down. For dinner, I turned the leftover roasted potatoes and broccoli into a delicious hash, which we ate with leftover salad and leftover french bread. I then had a productive evening listening to the Jazz beat a McGrady-less Rockets (when I actually watched, the Jazz didn't do so well, so I may have dozed a bit during the third quarter), then watching an episode of Law and Order: Criminal Intent, which I am finding alarmingly addictive.
Posted by Lisa B. at Tuesday, December 27, 2005 2 comments: 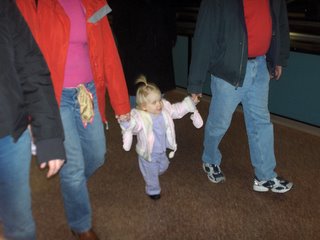 An extremely short member of the Scottish contingent walking with her escorts in the airport. 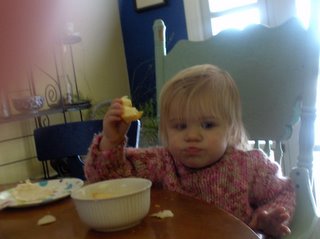 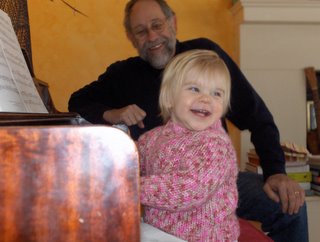 Miriam plays an hymn to Bonnie Prince Charlie.
Posted by Lisa B. at Monday, December 12, 2005 3 comments:

(Either that, or the band is called Teenage Fanclub. I always get the two mixed up.)

Below, see the birthday party of my son (the one at far right with the ski cap and mouth so full of pizza he can't manage a proper smile). He turns seventeen on Thursday. Happy Birthday to him. (also happy birthday to Middlebrow and Dr. Write!) 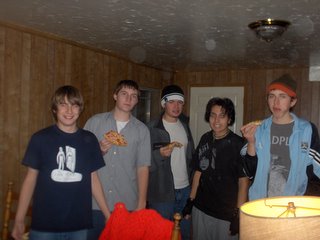 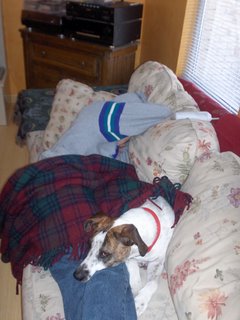 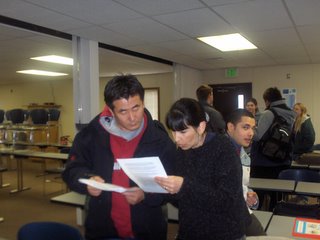 As the poet Gail Wronsky once wrote,

The Spanish dancer said, "This is your last day."
"But," she said, "it is not your very last day."

[I invite the readers of the Store to contemplate the pretty much all-purpose utility of the above lines, which are contained in Ms. Wronsky's creative dissertation at the University of Utah from many years ago.]

Today is the last day of classes. I find myself feeling nostalgic for the class, choosing to remember the challenging, engaging, scintillating time we spent together. This nostalgia (dare I call it love?) for the class leads me to fend off a tear, sometimes not quite successfully, to write comments on the students' final projects and e-mail the comments to the students, as if the students care about my comments when the semester's over. Maybe they do. Anyway, I will miss my students from this semester. [Note: the photo above is of actual students on the actual last day of class, taken with my own actual digital camera.]

Today, twenty-five years ago John Lennon was killed. Click here to read John Lennon's FBI file, or you can check out this weird project that aims to recreate John Lennon's personality by programming an Artificial Intelligence engine with his words and thoughts. Alternatively, you could just listen to an old Lennon recording. Walls and Bridges is a personal favorite.
Posted by Lisa B. at Thursday, December 08, 2005 1 comment:

Tonight as I cooked our dinner (clean-out-the-refrigerator linguine and last-half-a-head-o'-lettuce salad) and then made granola, I contemplated the pretty much permanent wreck that is my kitchen. If you've ever had dinner here, you may not know this fact about the near permanent wreckage (although you may, and if you do, then please keep it to yourself), since for a dinner with company, we try to clean up nice. But day to day, there are dishes that, though clean, we never quite put away, since the historian usually loads and unloads the dishwasher, and I could be a little more prompt about putting the pans, etc. in their proper places.

Also, there is an insufficient amount of proper places for things in my kitchen. This may be because I am organizationally impaired, but it may also be because of my penchant for bringing more kitchen stuff home. To wit: new ice cream maker, innumerable serving pieces that were on sale for an irresistible price, ramekins, espresso cups. Also I save things like jars, because there's nothing more useful than a small-ish jar for transporting vinaigrettes, for instance, to a family party when you've been assigned a salad. Add to that the enormous amount of garlic we received from our farmer at the farmer's market. At this point, it's probably containable in one brown paper bag, instead of the myriad of brown paper bags in which we received it. But in the myriad bags the garlic remains, with all of the bags in a very large bowl that I bought at a consignment store (for an irresistible price).

Okay, all this is to say that, though such a rumination would generally put me in a soul-despising crisis of self-loathing, it has not, and here is why: soon, I will be baking. I have toyed with the idea of replacing the baking and delivering of baked goods to the neighbors with other holiday projects, such as ice cream making (also mass granola making), but I think I will probably bake the same stuff I always bake every year. Anyway, soon the kitchen will be a happy mess. There will be sprinkles and colored icing, dried fruit and nuts, yeast and butter. This year, my Scotland daughter will be here to help. Once she and I decided to take on a very complicated cookie recipe that resulted in checkerboard cookies of vanilla and chocolate doughs. They were so damn cute it was hard to eat them, even though they were good. I guess I'm probably not willing to go that far for a cookie. But to go as far as making dozens and dozens of various treats to give away?

Yes, I am willing to go that far. But first, I will clean up my kitchen--when you embark on a cooking project of this magnitude, it's best to start clean.
Posted by Lisa B. at Monday, December 05, 2005 6 comments:

I don't usually write about politics here, but thought the readership of the Store would be edified by the following:

[at the conclusion of the letter she wrote, declining the First Lady's invitation to attend the National Book Festival:]

I tried to see my way clear to attend, as
an American who loves her country and
its principles and its writing--against this
undeclared and devastating war. But I could
not face the idea of breaking bread with you. I
knew that if I sat down to eat with you, it would
feel to me as if I were condoning what I see to
be the wild, highhanded actions of the Bush
Administration. What kept coming to the fore
of my mind was that I would be taking food from
the hand of the First Lady who represents the
Administration that unleashed this war and that
wills its continually permitting "extraordinary
rendition": flying people to other countries
where they will be tortured for us. So many
Americans who had felt pride in our country
now feel anguish and shame, for the current
regime of blood, wounds and fire. I thought of
the clean linens at your talbe, the shining knives
and the flames of the candles, and I could not
stomach it.
Posted by Lisa B. at Thursday, December 01, 2005 3 comments: