A few weeks ago, I told the historian that I wanted to write every day this summer. What with international jetsetting and whatnot, that has not exactly yet "happened." But awhile ago, he asked me if I might want to write when I was up at the cabin, and the answer was

For the last few days, I've been sketching and noting and whatnot--you know, writing. So my head is kind of like this: 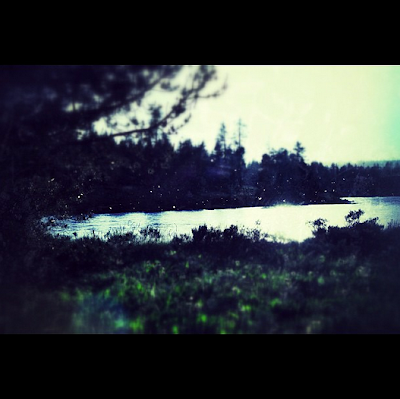 That's the famous insect life of the Henry's Fork, right there, the little specks in the middle of the picture. The river is the peaceful flow of things here. The insects are the ideas that have me buzzing.

For instance, there were a ton of things in the countries of Scotland and England that I did not see, if you can believe it. In fact, so many things that I did not even know about them! One day, for instance, (just, you know, while we're for instancing) we went to Newburgh beach, on the North Sea, but with the River Ythan emptying into it. Thus, an estuary. (I have never written about an estuary, or a poem with an estuary in it. Just saying: it could happen.) But as it turns out, there's also a castle in and/or around Newburgh called--wait for it--Knockhall Castle, built in the 16th century by a certain Lord Sinclair, of Newburgh. In the 17th century, clan Udny bought the castle, and basically stayed there with, you know, the ins and outs of Scottish politics and whatnot, until the 18th century, when a fire gutted the place and they moved back to their other castle, Castle Udny. All of which are in Aberdeenshire! Where we were! I ask you.

The other thing: we were dissuaded from my--it must be acknowledged--rather belated enthusiasm to go to visit the moors. The actual moors, where the besotted and the gothic butted into each other with the result of doomed love. "The moors! Why d'you want to go there? You won't see anything because of all the mist!" was the verdict from my son-in-law's Cumbrian stepfather. "The moors! The mist! The moors!" It would all be horrible and stupid. So we went to see Roman stuff instead, which was awesome and amazing. Stirring. Fantastic.

But! The national parks of the Yorkshire Dales and the North Moors: if only we had been able to do everything! Because they also look amazing, if perhaps also having an unfortunate tendency to obscuring mists. There are 13th century ruined abbeys, for instance. And limestone formations. And dales galore, and heather moors.

These are the things I'm thinking about, head abuzz; but the river, close by, keeps everything steady. So steady that I will write every day. I'm sure of it.
Posted by Lisa B. at Wednesday, June 13, 2012