I would need a better camera,

or better words or at least a better lens. But I'll give it a whirl anyway:

Today, we drove up a mountain, which was different than what we thought we were doing. We thought we were driving east where there might, possibly, be . . . wait for it . . . bears. Or, to be more precise, where "it's the kind of country where you'd think there might be bears," as our friend stroke grocer recommended. We talked to him like three different times to straighten out what the directions would be to this mythic bear-possible-land. All of them involved Hwy. 291 and the post office.

Today we bought what surely is the most useless map of all time, of Jefferson and Fremont counties. It futzes around with all sorts of little roads with their little number names, not one of which we saw in actuality. But never mind. We did see a small sign with the number 291 on it, and lo we did follow it, and we did not turn from it. That's because the cashier at the other grocery store where we bought the useless map told us that, yes, he knew about 291, it was an unpaved road, "kind of washboardy," and criss-crossed by all sorts of road shenanigans--"a railroad track, ATV tracks," whatnot--things that might lead a person who doesn't know her way around a backroads mountain to get real good and lost.

Whatever. Our middle name is "Intrepid," so off we went up a mountain. Which we did not know we were going to do.

The guy was right--there was criss-crossery--but it didn't divert us from Hwy. 291, no sir. Every so often, we saw a sign, which kept us on the true path. Once we passed Hwy 292, which was on the map, we started to ascend.

"We're going up a mountain," I said to the historian. Why this should have been surprising, I don't know. But it was. 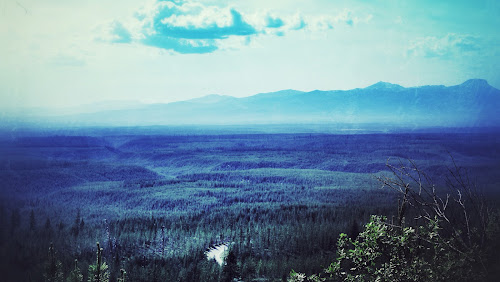 The people, it blew my mind.

For the life of me I cannot figure out what mountain or ridge we were on top of. When I do find out, I will let you know.

6/23: intel: Here--that curvy folded part--is where we were. Unfortunately, it still has no name: 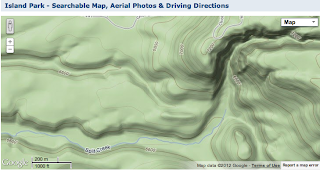 Email ThisBlogThis!Share to TwitterShare to FacebookShare to Pinterest
Labels: Idaho