Today, after our epic Yellowstone bear-seeing quest, we stayed close to home--took a little bike ride, admired the river which had, at the time we rode by it, practically no fishermen, read a lot, wrote, made cookie dough (which is currently curing in the refrigerator, since that's apparently what cookie dough needs nowadays), took small naps. You know, like you do.

An old friend from long ago, a writer and a gentleman, tells me on Facebook, where I have been airing my plaintive lament about the bears and how Yellowstone is apparently not letting anyone see them, that he sees bears all the time in the park, and also that bears show themselves only to the pure in heart. And, seriously, there's a part of me that kind of, sort of, believes him.

I probably need to engage in more serious, focused bear-seeking behavior, and not just identify a stretch of road where bears have appeared to other people. Perhaps I need to slow down more, stay still more. Perhaps I need to learn, really, how to look for bears.

When I was a kid, bears just showed up at--literally--your picnic. There's a part of me that thinks I ought to be able to see a bear just by showing up myself. A few years ago, I was in fine mega-fauna spotting form (no bears, but moose). Of late, I appear to have lost my animal-finding ways.

(I may or may not be talking about my inner life here.)

Anyway. I've been thinking about totems, a little bit--the animals that seem to express what we long for in our inner lives. What animal is my totem? Sometimes I think it is a dog, but actually a dog--a certain dog--may be my muse. Can a dog be both a totem and a muse? Maybe. I find that when I see other animals, I see Bruiser in them. For instance, take a look at this seal we saw in Scotland: 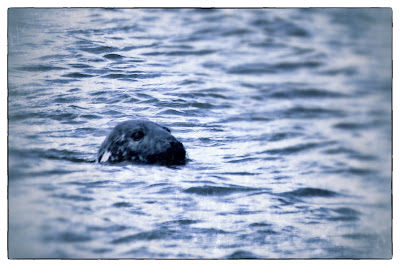 There were lots of these seals lounging about on a sunny day at Newburgh beach. Lots and lots of them. Some of them were in the water, coming very close to the edge where my granddaughters, their trouser legs rolled up, were running up to and barely into the water, then running back. This one's eyes remind me of Bruiser's--wary, soulful, apart.

I do not think a bear is my totem animal nor my muse. But bears are an emblem of where I come from, so I would like to see one again--be in the right place, however one defines place--be clear-eyed, patient, still enough--I want my heart to be pure enough for a bear to reveal itself to me.
Posted by Lisa B. at Saturday, June 16, 2012