The filth and the fury.

Even though Dublin is kind of a dirty city (I hope you aren't reading this, Dublin, but if you are, no offense!), I came home and now I feel that my house is even dirtier. My god. My mom asked if this was because of the teenage boys who stayed at our house with Bruiser and I was forced to admit that no, it was pretty much me, who spent the hours before leaving the country sending poetry out to the void.

In these dark times, one is forced to get it together and at least think about vacuuming up a dust bunny or five hundred, do the dishes, and start a load of laundry or ten. In these dark times, one must fend off the rising panic one feels when one is confronted with one's own . . . oh, hell, I just feel overwhelmed by it all and I have to make a dent in it or else feel like fleeing my own house. And that will not do, not in these dark times.

However, in such dark times, I have taken inspiration from W.B. Yeats, and not just because he wrote a poem that began "Things fall apart." That line is one of my many mottos (others: how hard can that be?, what the hell?, and I've had just about enough of your shenanigans.) (also, I am considering, Bitch, you trippin'! Does anyone have any thoughts on this as a motto? Let me know.). However, I am mainly inspired these days by W.B. Yeats because he was tirelessly making stuff and taking inspiration from the most amazingly dubious stuff, including crazy spiritualism of all sorts. In other words, his mind was full of nonsense and he still made beautiful, sublime art just about until the end of his life. In the collection of his papers exhibited at the National Gallery of Ireland, they had all sorts of his notebooks (comforting to me, a notebook keeper of the most random kind), including notebooks that showed some of the automatic writing done by his longsuffering and beautiful wife. It was a wonderful exhibit that you can get a sense of by looking here.

I am also currently taking inspiration from Francis Bacon's studio, which was originally located at 7 Reece Mews in South Kensington in London, but which, after his death, was moved, part and parcel, and then reassembled just as he worked in it, at a gallery in Dublin on Parnell Square, the Hugh Lane Gallery. The most polite word--in fact, the word Bacon himself used--for this gallery is chaos. When I saw this space, I saw my very own soul, and it was (for once) one of the most comforting things I ever saw: so messy! so much stuff! Bacon was not a minimalist. Not! a minimalist, and an extraordinarily productive and powerful artist. Voilá: 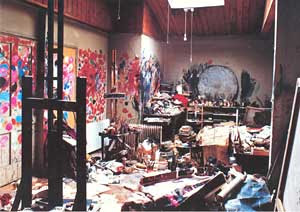 And finally, some more pictures from our Ireland trip, for those of you still interested:

Email ThisBlogThis!Share to TwitterShare to FacebookShare to Pinterest
Labels: art, bacon, flee, in these dark times, what a dump, Yeats