In the last couple of days I have seen one movie for the third time, and another movie for the second. I'll spare you the specific stories that motivated the rewatchings, but it turns out that I do re-watch things on a fairly regular basis. (The eight times I watched Liar, Liar in one summer is my record, I think, although I may also have watched Cabaret a shocking number of times in a movie theater.)

I found each of the films stood up well to re-viewing. What I loved about Silver Linings Playbook--the specificity of the environments, the details of the characters, the flip of Jennifer Lawrence's ponytail and her I'm-so-tough eyeliner and nail polish, the way Robert deNiro wakes Bradley Cooper up to tell him he wants to watch football with him, his own obsession in mighty struggle with his desire to convey his love, the sweetness and watchfulness of Jackie Weaver as the mom--all these things, to me, shone with greater clarity. Sometimes what you love about a film is better when you don't look again, when you just remember it--the cracks are more evident, the wit more forced. But sometimes, what you love is burnished upon re-watching.

Anna Karenina's artifice, staginess, rigorous construction, seemed this time to melt away. It was present, it reasserted itself, but it felt less intrusive, and this time, I found the film more devastating. Which is as it should be, I think. 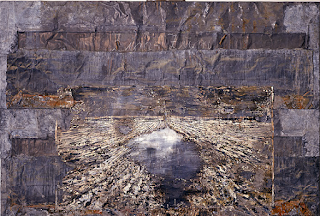 Who can say what shapes our viewing, or re-viewing, of a film? Is it the company in which we see them? the time of day, the pressures on us in our regular lives that exert themselves with greater or lesser insistence at a particular moment? The fact that we saw it on a holiday, or in a stolen afternoon? And some films, might reveal themselves more fully to us over time, and upon reexamination? Why would we believe that everything about a film should reveal itself in just one viewing? I have visited certain paintings, or series of paintings, every chance I get--not that often, because I don't live in a city with a big art museum--but I've looked at, for instance, a huge work of Anselm Kiefer in the National Gallery any number of times. It seems like forever that I have been visiting this painting. Whenever I'm there, I spend some time in its presence, to experience its scale, its force and dominance. 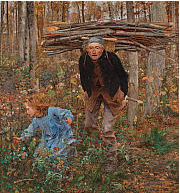 Or there's a painting at the Milwaukee Art Museum by Jules Bastien-Lepage that rivets me. I don't know if it's a great painting, but everything about it is beautiful to me. I have been to Milwaukee just two times--one more time than I needed to, probably--but each time I went to the museum (several times each visit to the city), I made sure to spend time with this painting. I loved its texture, the movement of everything, the gaze of the woodcutter. The little girl's hair.

Email ThisBlogThis!Share to TwitterShare to FacebookShare to Pinterest
Labels: return