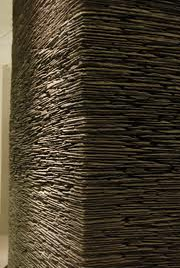 Today in class, we discussed writing processes. I'd had them read a couple of things, then we talked, then they wrote.

Tomorrow is my writing group. I have a poem, a short sequence, I've been working on, on and off, for awhile. I worked on it some more tonight. It's not ready for my group, and unless I have a vision in the night, it probably won't be ready tomorrow either. 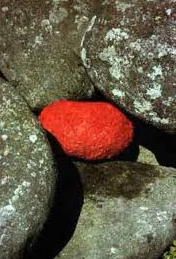 When I started the poem, I did like I often do these days: I started a set of notes, out of which emerged a draft. A draft that has sat there, cold and uncoddled, in my files. Like a stone.

I watched a part of a lecture by Andy Goldsworthy tonight, who is at least in part the subject--the nominal subject--of my sequence. He sometimes wraps stones in brilliant-colored leaves.

My poem is like a stone, unwrapped by brilliant-colored leaves.

He placed his wrapped stones in flowing water. Water, he says, is crucial to color.

My poem, the cold, unwrapped stone, sits in still water. Not to say fetid water. Clean, but still.

When I opened the file and touched the poem again, it was stubborn and resistant to my efforts. I opened its companion file, called Notes for [working title]. I did, as I had done before, some research. I opened a new document and wrote some lines. I investigated possible recipes for my writing group's lunch tomorrow. I considered buying a yellow cardigan.

We took Bruiser for a walk. "My poem's not going to be ready, probably," I told the historian as we gathered and donned our winter gear. Coats, hats, gloves, scarves, balaclavas. (I am not exaggerating.)

I explained the subject of my maybe-poem: "He makes ephemeral things, but the pieces I'm talking about aren't particularly ephemeral."

We got Bruiser's harness on him, gathered the paraphernalia for the walk (leash, bags, flashlight).

"In fact, they're all elements of a house. Of houses," I said. (paused:) "Actually, this"--meaning this conversation--"is pretty helpful." 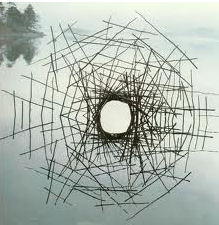 Outside, the air was thick with particles, glittering, cold, almost like snow, but more like icy air. The walks were mostly clear, although with a new, thin, almost invisible sheen. Enough slippery, iced over patches to make each step a little dangerous. 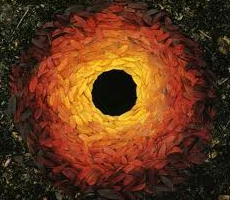 I'm thinking about how a process is so breakable and impermanent and transient and unreliable. Like twigs affixed into a  pattern, held together with only thorns.