For crying out loud. 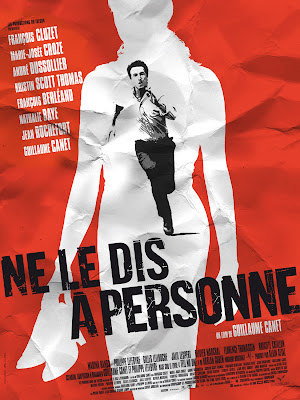 Just saw Tell No One, a French thriller that is getting terrific reviews all around. Apparently, "it gives you an itch you won't want to stop scratching," as well as being "crisply and competently filmed" as well as "beautifully written and acted." Also, "Thrillers aren't always so thrilling, but Tell No One is -- and absorbing, sometimes perplexing and often stirring as well. " (That's Entertainment Weekly, Salon, The New York Times, and The Wall Street Journal talking.) It was entertaining, well-acted, nicely filmed--but, as in so many thrillers, there was a moment when the film ground to a halt so that a good ten minutes of exposition could take place, explaining everything to the nth degree. To a risible degree. Yes, during this leisurely exposition, I laughed.

Why? Too much fidelity to the novel, which was no doubt plotted so thoroughly that its covers could barely contain all the twists? Who knows. But I don't get it: how can a filmmaker not know that all the dread, adrenaline, narrative steam s/he's just spent almost two hours building up will dissipate--utterly--when the film sits down to have a cup of tea (or, in this case, several stiff drinks) whilst the troubled evildoer tells all, and all the while brandishing a pistol at our hero?

Am I wrong? The Onion A.V. Club agrees with me. So what was all that critical euphoria about?

[in case you're wondering, now I'm feeling guilty for possibly hurting the movie's feelings.]
Posted by Lisa B. at Friday, August 22, 2008