This morning, the historian went out before I woke up to take a bike ride. So the house was quiet. I made my little breakfast and chatted with my daughter in Scotland--it had been at least two weeks since our last conversation.

The historian came home. We read the paper while he ate his breakfast, drawing one another's attention to this and that article in the Tribune and the Times. I made a list. This is what was on it:

Before anyone expresses shock at how behind I am in my television watching (!)(this list isn't the half of how behind I am, just for your information), I would like to point out that I am caught up on my (highly selective) list of housekeeping chores, except for vacuuming, which: it is too hot, in my opinion.

In the mid afternoon, my sons, all of them, were here for a few hours to kibbitz with one another and catch up, and to have dinner. Soft tacos, in case anyone wants to know. Guacamole. Pineapple. It was good. We had a dance party, briefly, to the new Beck song. Then, they all departed at once.

The historian sat out on the patio as the evening cooled, reading a new book. Inside, I finished a detective novel set in New Orleans, floridly plotted and, perhaps, floridly written, although to say 'florid' may be a little glib for what I found interesting in the novel. I've put in a request with the library's robot for the second book in the series. Evidently, I'm interested in this potentially florid yet compelling series, and there you have it. I also started a book I heard about on the radio, when I was out buying the pineapple and some tortillas and a couple of avocados. I came right home and downloaded it.

Now, it's time to read a little more and end the day in quiet, an estimable bookend to the day's beginning. I'm grateful for it. 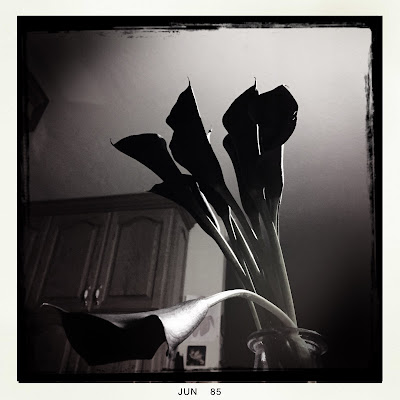