I answered a few more panicky student e-mails ("HTMS! I haven't heard from [group member] and I am FREAKING OUT!")(I may be exaggerating a little, but only the all-caps--the rest is verbatim). Then I gather'd my wits about me 'fore assembling my wherewithal and inner resources and whatnot to grade.

In other words, I am not yet actually grading. But by golly I am almost ready to grade.

Instead, today I read more manuscripts for the competition (for which I'm a first reader). I put some envelopes in the actual post at the post office. I took a long walk. I spoke soothingly to Bruiser. And I went back over to my daughter's, where both a little boy and a very little girl (my grandchildren) were available for a visit.

I held the little girl, whom I had inexpertly swaddled (but never mind, she was as cozy as a little bunny in her blanket), and played various games with the little boy. We played Superhero Memory. He beat me once, we tied the second game. He did some puzzles on the iPad, and then we made a little animated movie.

In the app for the animation, you can actually draw characters of your own, and scenes. Which is fun, and also a little humbling.

This figure below is a robot. I actually did this animation with another grandson on another day. He  demonstrated to me, several times, the kind of robot he wanted: it had an arm that would reach up to touch its head, and then its neck would swivel to the side. He was not well-pleased with this robot, but I think you can see the reach and swivel. Can't you? 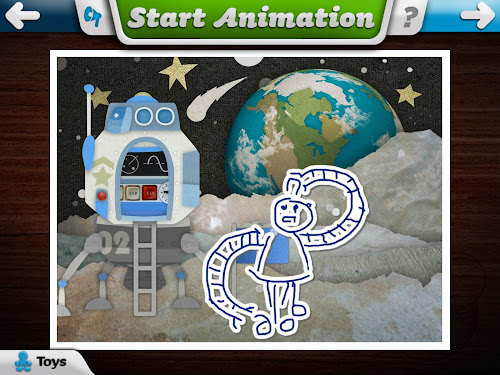 This is a screenshot from today's animation: 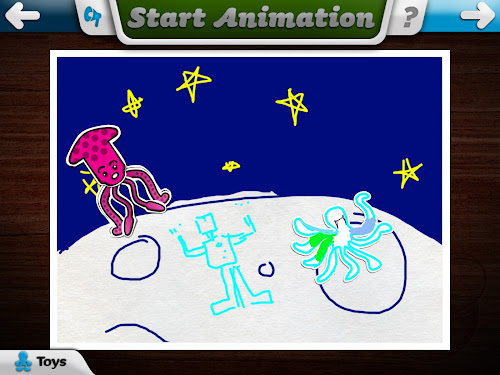 We agreed we would draw a character and also a scene (moon surface, obvs).

"An octopus," he stipulated.

I started drawing arms galore. "How many arms is that?" We had six, added two more.

"It's a vampire," he said. I drew fangs. (I'm particularly proud of those fangs.)

"Put sleeves on him," he said.

"Sleeves but no shirt? On all eight arms?"

"No, just sleeves. Long ones. That's enough," he said, while I drew and undid and re-drew and erased, and we ended up with the outfit you see on the vampire octopus: long-ish sleeves on three arms.
After the visit, which was quiet and sweet, and productive on account of the animation and octopus-drawing, I went to Costco with my son-in-law and grandson, and bought twelve pounds of ham, sliced, for a dinner for homeless men. I took the mighty weight of meat over to my son's house, because they're some of the shepherds of this monthly dinner at The Road Home. They were having dinner, and invited me to have a little with them.

So I put the ham down, and ate a bit of supper with my son's family. We talked about Christmas, and skeletons, and I watched the boys do the skeleton dance, because the older one has a little bit of a skeleton thing going.

As I drove home--it was 6:30, very dark in this darkest part of the year, the Christmas lights blooming on either side of the road--I felt calm. I still have a lot to do. I'm not worried about it, though. I'll get it done.