We are having a party on New Year's Day, a dinner party, and a big group of family are invited. We started trying to have our dinner after Christmas, because the number of events multiplied by the enormous number of family connections multiplied by a factor of divorces/remarriages would knock the breath out of you if you tried to have a dinner before Christmas. At least that's what we've found.

This means, though, that after having baked myself unconscious, practically, I needed to dig deep within and contemplate making food for around thirty five adults and children. Come up with something to make, then a plan for making it. Shop for the food. Find a place to put it. Then cook it.

Truthfully, I love doing it. I've really enjoyed learning how to cook for a big party, making everything festive and delicious, and it's fun to have an occasion for trying things I've not tried before. Simultaneously, I've tried to figure out how to scale back a little--how to cook a lot because we need a lot, but not so many things, and not so many complicated things. This simplifying goes pretty well in theory, but in actual execution, simple tends to flower into fancy pretty quickly. Here's what I mean.

Awhile ago, whilst roaming the aisles of Target, I came across an adorable teacake pan: 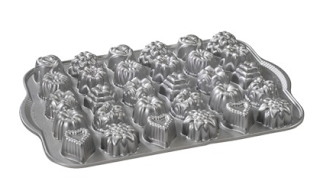 It was marked down for some unknown reason, and is everything a person might want in a teacake pan and more. Of course I bought it. Have I made teacakes? No, of course not. This pan belongs to a parallel life, the same parallel life occupied by the several sets of teacups and saucers (and matching tiny versions, demitasse size) I also happen to own, i.e., a life I do not actually lead, but imagine myself leading with great vividness. It is a fine life, with leisure in it, and friends who also have leisure, because they come over for tea and cakes. Adorable little cakes, baked in a teacake pan.

Well, be that as may be. As I was thinking about what to make for our holiday dinner--perusing my previous menus, feeling generally uninspired, contemplating a menu of sandwiches and potato chips--I thought, well, at least I know what I'll make for dessert. Petits fours, that's what! That's right: I imagined anchoring my festive post-holiday meal, to which three dozen people were coming, with tiny little, labor-intensive cakes, for which I would need not only to identify a foolproof recipe (doesn't exist), but also master a number of techniques (not going to happen).

In my thoughts, I carried around the petits fours version of this dinner, with a hazy, vague entree and ill-defined side-dishes hovering around the tiny, unbearably cute dessert portion of the meal, for a few days. But shit, as they say, got real when I started trying to find a recipe, a made recipe, vouched for by other bakers, one that would not result in tears when the cakes came out of the pan, or when I attempted to cover them with a suave ganache. Petits fours, as it happens, are a pain in the ass. This is a truth universally agreed upon by all who have ever tried to make them. I myself tried to make them once, prior to the acquisition of the adorable pan, and they were a pain in the ass at that time, and a pain in the ass they remain, apparently.

Fine. I said to myself. I will make petits fours another day, when so much is not at stake. When I have leisure, and my friends will have leisure. And we will sit in the back yard under the cherry tree, and drink tea and eat cakes, and life will be beautiful. I.e., never.  Scratch that 25%-of-a-menu-plan. What next?

I Googled "New Year's Day dinner" and "New Year's Day buffet" and "festive holiday dinner" and came up with these two ideas: Butternut Squash and Sage Lasagne, and Tuscan Roast Turkey Breast. That led inevitable to this plan: two entrees, a lovely salad, fruit, roasted vegetables, and dessert, whatever it might be. I plotted out the shopping list and a basic scheme for cooking the food. I invited my daughter to come food shopping with me.

"What are we having for the party?" she asked.

"That sounds..." my daughter hesitated.

"Yeah, I tried, but I can't find a way to say that sounds good," she said. Menu revised: vegetarian lasagne of the more traditional kind.

Does this menu sound simplified? Well, maybe not. I am cooking parts of it on three successive days. For instance, I have made a cake today already. I've also made the lemon curd that goes into another dessert. Tomorrow I will make yet another dessert. That's right: there will be three desserts. In my defense, I believe they will be delicious. And at the end of the affair, that will be the last of the holiday cooking, and we will begin the rigors of the new year. The end.
Posted by Lisa B. at Sunday, December 30, 2012