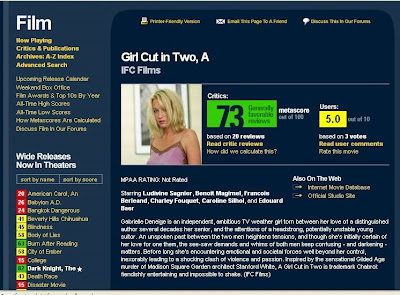 Tonight, the historian and I went to see Claude Chabrol's A Girl Cut in Two.

This film has Gabrielle, played by Ludivine Sagnier, a lovely and very well-coiffed, made up, and dressed weather girl, falling for a writer who, from all evidence, is an insufferable, personality-less, mot-spouting prick. Apparently, though, he's gonna teach her the sexual ropes, because, well, he's experienced. And old. Married, a degenerate, and did I already say jerk? Jerk.

On the other hand, a sociopathic heir to a chemistry fortune (that sounds pretty hilarious, when you put it that way, but it is not played for laughs in this movie) also falls for her. Dandy-ish, in foppish clothing and a tousled, moppy hairdo, he is scary and stalker-ish. Add to that that his family is insufferable (insufferability is a theme in this film), snobbish . . . the mother has the complexion of a vampire.

With whom will she fall in love? is a wedding in the offing? what will the consequence be? to what depths of depravity will poor Gabrielle fall? what will her dress look like when this happens? and who cares? That is my summation of this good-looking yet tedious film. At least it was set in France--I enjoyed watching the France go by, frame by frame.

I also happen to feel that this film is a little bit overrated, since lots of people are saying things like "impeccably made," "beautifully directed," and "the work of a master." Manohla Dargis says that it's an "erotically charged . . . story of a woman preyed upon by different men and her own warring desires." Charged? Preyed upon? Warring? Okay, but then why did I feel so blah about it, in the end?

I have a friend who claims that there are no good French movies anymore, and at this point, I'm prepared to concede that there is some justice to this . . . check this link for an incomplete listing of French films, decade by decade to decide for yourself. As for this film, you can see for yourself if Wesley Morris is correct about La Fille being a "luxuriant sex opera" or if, as the lights come up, you might find yourself remarking to your viewing companion, "Hmmph." Or perhaps, "Those crazy French." Or even, "Maybe we should have seen Role Models."
Posted by Lisa B. at Friday, November 07, 2008