Open letter to the end of April. 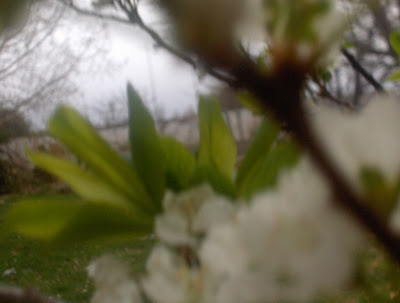 Dear twenty-ninth of April,
I understand that you are appearing tomorrow, pretty much everywhere. I also understand that it's not really your call about when you show up--in fact, you've been lined up between the twenty-eighth and the thirtieth for, oh, I guess about a year now. Still, I'd like to note for the record out just how hasty, how impatient, I feel you are, waiting around the corner, drumming your fingers on the wall, making the obvious point that we're well into spring now, and by God, we've all got plenty to do.
What about the seeds I bought when spring was wearing a flashy dress, way back in early March, making us think it was time for everything: lighter clothes, sandals, no more tights, planting stuff? But I think now, we may have officially reached "too late for peas and lettuce," and it just doesn't seem fair. Was I supposed to be waiting, parka and trowel in hand, for the fifteen minutes between that snow squall and "oh my hell, it's 80 degrees"? I guess so. And twenty-ninth of April, you are not making it easier, bearing down on me and my failure to carpe diem, hauling the first of May around like it's your best friend. Thuggy first of May.
"May" sounds nice. There's May Day and so-called May baskets (although, where did May baskets go? you'd think someone would have figured out how to make some money out of that, in greeting cards alone.). Proverbial May flowers (following April showers). Steady, beautiful weather. But really, May just throws its weight around, because May knows it's pulled a fast one: April came and went, sure, there was a bunch of weather and some tulips, cherry tree bloom yada yada yada and look out, it's July.
Listen, I've got shit to do, twenty-ninth of April. I have revisions. Movies to make. Seeds to plant and yard work and moreover, I've got to find the motivation to do it all. Twenty-ninth of April, just slow down, will you? Take your time. Sleep in, why don't you. Or maybe fall into a nice temporary coma that lasts for maybe a week? It's okay. I'll wake you up when it's time.
Sincerely,
Myself, hightouchmegastore
Posted by Lisa B. at Tuesday, April 28, 2009