I'm thinking about glass houses, because I am working (nominally) on a poem about the radical insufficiency of art.

The house on the bottom row, second from the left, is designed by Carlo Santambrogio, and is located in Milan. 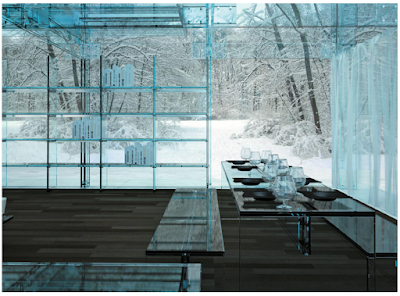 It's a concept house--nearly everything in it, except the bed, is made of glass. It's theoretically livable, though--the exterior walls are thick, and sealed, and it can be heated. 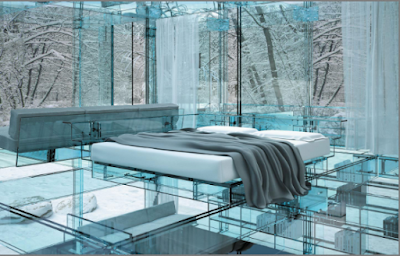 I'm thinking about two things: first, the idea, one that I can't place definitively (a visiting scholar years ago when I was a grad student at the U talked about it, I think), that in the psychodrama of human existence, a common trope is that of mistaking a threat for a shelter. And second, the idea of art and art spaces as being shelters, temporary, that substitute in the moment for the shelter we need. Which, of course, is never quite available.

A third thing: Frost, writing in "Directive," about a lost home:

And a fourth thing: this discussion of how Philip Johnson and his companion David Whitney actually lived in the series of structures on the 49 acre Glass House compound. This note


The house was astonishingly tchotchke-free. "I don't think clutter was allowed," the painter Jasper Johns, a friend of both men, once said. "One was always aware of their ruthless elegance."

I find particularly telling, since my own house is not tchotchke-free, in fact it is the opposite of that, and in fact, I believe that it is in that tchotchke-ness that my house's artistry resides.

One more thing: I'm thinking about the Francis Bacon reconstructed studio in the Hugh Lane gallery in Dublin. I wish I had had time to visit it when we were there. That art space--the art made in that studio, the studio itself as a home--seems, if not sufficient, at least approaching sufficiency.
Posted by Lisa B. at Wednesday, May 27, 2015