In movies, I like a few things, pretty much without exception:

I love a story about a compromised person who needs, really needs, to do one thing right.

I love a film that has an elegant structure, one that continues to reveal itself for the duration of the film and beyond, in memory.

I love a film that trusts its own aesthetic commitments.

I love a story with words that last and last, words that come to be talismanic for me.

Like all the thinking moviegoers of America in 2007, I saw the trailer for Michael Clayton and I looked forward with great anticipation to the film. And when I saw it the first time, I felt within the first minute that I was in just such a movie: the character, the structure, the aesthetic, the words. The swank law firm in a moral swamp, with no sign of it aside from one senior partner who was cracking up and, in the process, taking their money case to the brink of disaster. The titular fixer is sent to try to salvage the situation. The movie bore out my initial intuition. It seemed perfect to me.

When I saw the movie the second time, in the theater, it was so I could commit to memory the words of Arthur Edens (played by Tom Wilkinson) in the opening monologue:


(That chilly interior, so quiet, juxtaposed with the frantic drive of Edens' epiphany.)

The third time, it was for all the details: Clayton's son and his book, Realm and Conquest, the way the father and the son were with one another. The encounter on the street between Clayton and Edens, whose arms are full of bread: Clayton saying to him, "I'm not the enemy," and Edens replying, "Well then, who are you?"

Lines from this film reverberate for me. Edens saying, "I set that notion aside. I tabled it," for instance, whenever I feel gripped by an idea that I know will not serve, that will derail me from my purpose, that will lead down a path that is unhappy or unproductive. More, though, I try not to make the film a lesson for me. I think about the characters and their dilemmas, the ways that their working in the cogs of a giant system means that their agency can, at any given turn, seem to be chokingly limited and bounded. I think of the stillness and the quiet at points in the film, that seem to be analogues for conscience.

I love a film that gives me this: 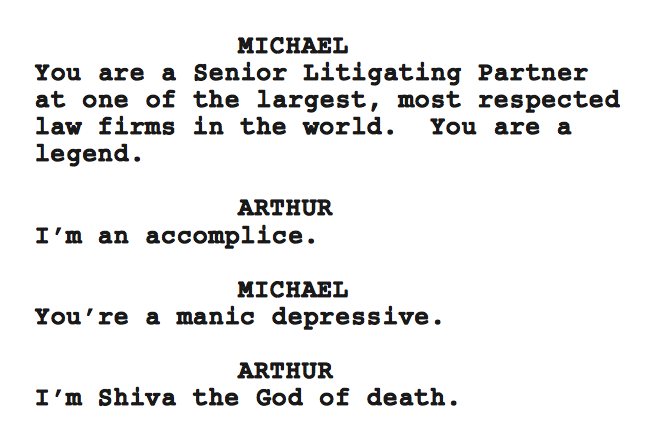 and an image as preternaturally beautiful as this:

I would show it to you, but I can't show it to you. You'll have to see it for yourself, this film that I love, and every little narrative and filmic miracle therein.
Posted by Lisa B. at Friday, February 20, 2015