I had breakfast with my sisters, my niece, my mom and my aunt today. After that, the historian and I went to the farmer's market and bought
Then, I found the following for you:

Triumph the Insult Comic Dog Interviews Star Wars Fans Waiting in Line for Attack of the Clones [This is hilarious but if you're not familiar with Triumph's oeuvre, it is rude and profane. And hilarious.]

Exclusive first look: Inside Colette x Gap [Explanatory note: The Gap is doing some kind of limited partnership with the French retailer Colette. The "exclusive first look" appears on New York Magazine's fashion blog, The Cut, which is exploding with activity because this is Fashion Week in New York! I know you already know that. ANYWAY: the exclusive first look is, literally, photos someone snapped through the front window of the store as the employees are setting up merchandise. Somehow, this strikes me as hilarious, and also also also fascinating, but in a sad way.]

This Strange Map, courtesy of Strange Maps, "The World As Seen From Paris." This reminds me of the map that was on the cover of The New Yorker, showing the United States from a New Yorker's point of view. Uncoincidentally, you can also find this on Strange Maps, along with a thoughtful discussion: 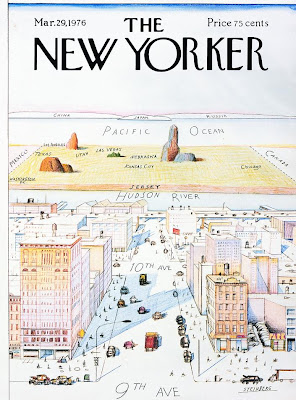 And, for the kids, Candylion: