"That's a hard ten," said the historian this morning. It was the second thing he said, after happy birthday. "Which is not so easy to get."

It took me a minute to figure out what hard ten meant. Right. Craps. Two fives, as in: fifty five.

Even though there are two identical numerals in it, the number fifty-five isn't as monumental as you might think. It's not iconic. There are places where it is the speed limit, and that's about it, numerologically speaking.

But fifty five is how old I am today, which was a pretty good day that ended up being a great day. For one:

1. I made myself pancakes, to start the day off right.

2. I taught the students about verb types and sentence patterns and, from the evidence on the ground, totally scared them nigh unto death.

I was prepared and everything. I explained thoroughly and we practiced away. But still: it's going to stay hard. I'd like you to show me the student who thinks that's good news.

3. However. After that class, it turned out that it was still my birthday and moreover, I could go home. Which I did. With dispatch. (<< note purposeful sentence fragments to your left.) Upon arrival, I made myself a sparkling lemonade, which hit the birthday spot. I also turned on the swamp cooler. Refreshing!

4. I took a small but restful birthday nap.

5. We went over to my daughter's house where we had a delicious dinner. My children had each made lists of 55 memories for me--so touching and lovely, I can barely discuss it. My mom and dad did the same, and also dug out pictures of me from the deep dark past. And there were cupcakes.

And the moon is full. Or almost full? So close it hardly matters.

That is the end of the birthday report, and thanks for putting up with it. In conclusion, here is a picture of me when I was twelve, on my birthday. 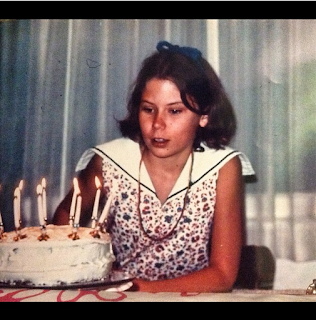 Email ThisBlogThis!Share to TwitterShare to FacebookShare to Pinterest
Labels: birthday birthday and more birthday, birthday cake, I'm gonna party like it's my birthday