I determined, a few weeks ago, that during spring break I would set aside two days/nights to work on my manuscripts. This determination survived my return from Philadelphia, which found me whiny and panicked about the work I had to do, and also fairly certain that I did not want to spend any more nights apart from the historian.

But as I looked around me at my house, and thought about how fun it would be to just putter around,  sorting through stuff, making toast, telling myself each morning how I would 'write' and 'grade,' I realized that if, indeed, I did want to work on those manuscripts, I would probably get more serious work done if I left. If I, in fact, retreated.

So I did. I took a room at a local motel and holed up in here like a poetry-writing motel-rat. Here's how it's gone: 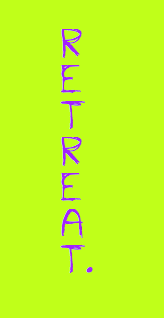 In the morning I will probably go print them both and take another look. Then I will go home and 'grade.'
Posted by Lisa B. at Thursday, March 22, 2012