Today I saw The Descendants with Dr. Write, the second time I've seen it (the first viewing was with the Historian). I thought it was every bit as good the second time, and that got me thinking about how many movies I see more than once, and why, and also what movies I deliberately seek out to re-view. And why. This may be a reflective post, so hang on.

My movie-going partners are a somewhat fractured bunch. I like, as readers of this blog well know, to see at least two movies a week--I feel robbed of something essential in my life if I don't. "I want to see all the movies," I declared to the historian while he was reading the paper, sometime during Christmas break. But the fact is, I don't want to subject him to some of the movies I want to see, or would enjoy seeing, or frankly would feel more complete if I had seen. He doesn't enjoy superhero movies or most action movies or sci fi or fantasy. I used to see movies with my kids quite a bit, but they've scattered. I typically see kid-oriented movies with them and the grandkids, with an occasional other movie thrown in for good measure. Sometimes that's a re-view. And finally, I see movies, here and there, with friends--trashy dance movies or romantic comedies or (sometimes) vulgar comedies.

If I were to draw a picture of my movie-going, it would look a little something like this: 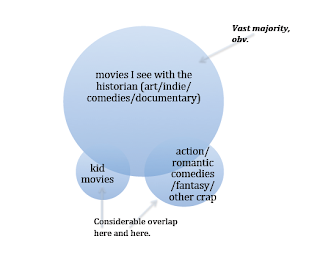 In those overlapping areas, that's where a lot of the re-viewing happens.

Some movies I have re-viewed in the past year:


That is a lot of re-viewing, honestly, but it leaves aside entirely the movies that I've seen over and over again, deliberately, because they are my favorites and because they give me endless pleasure and/or in some way formed me, or because watching them is a family ritual:
There are times when I would rather go back to the theater to watch a movie a second time than see something new, even if it's worthy.

The other night, we re-viewed a movie from the 90s that Bill Murray directed, Quick Change. My kids had watched it the previous evening, and one of them remembered that I'd loved it all those many years ago. So we pulled it up and watched it. It wasn't great, really, but the parts that were very funny from back then were still funny now, and it gave me great pleasure to see them again.