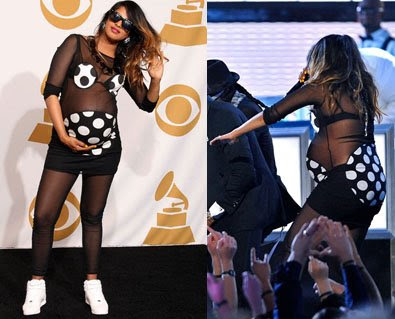 (Photos courtesy of Go Fug Yourself: because fugly is the new pretty.)
If M.I.A. has to fight herself in order to establish style dominance, which version of her, last night at the Grammys, wins? the dress in which polka dot patches are kind of like a deconstructed Minnie Mouse, covering--sort of--relevant body parts? Accessorized by awesome white trainers. And sun glasses.  And let's not forget the sheer footless tights. 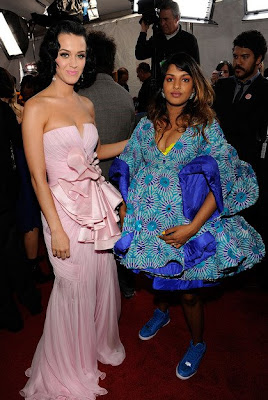 OR:  would it be the huge kimono satin-y thing that can double as a parachute in case she has to jump out of a plane to deliver her baby which is due, like, yesterday, adding a potentially MacGyver-esque aspect to this outfit?  Also, is that an acid-yellow bra peeking out? To complement the awesome blue trainers? (Ignore irrelevant accessory in the form of Katy Perry.)
It would be hard to call the outcome of this, right?  But I say it ends in a draw, with both versions so way out there, they take the breath away, however you might have experienced that.  Way to go, M.I.A.
[Note:  I have shamelessly ripped off this idea--X vs. Y--from The Cut, New York Magazine's fashion blog.  In the spirit of Larry Lessig, I am calling it a remix.]
Posted by Lisa B. at Monday, February 09, 2009

Email ThisBlogThis!Share to TwitterShare to FacebookShare to Pinterest
Labels: accessorized, fashion, out there, pregnant, remix