A little thing about Japan.

Maybe a year and a half ago, I read this story in the New York Times, about a Shinto shrine on the west side of Honshu, Japan, at Izumo, Shimane Prefecture.  This is the oldest Shinto shrine in Japan.  The shrine needed renovations--actually, a new roof--which necessitated the removal of the god inside.  Which the priests removed, the god being covered by a cloth; and now, people who want to can go inside to see some of the parts of the shrine that are normally seen only by priests.  People have flocked, and I sure wish I could too.
There are a zillion photos of this shrine.  Here are a few I've been poring over (I've also zoomed in on it using GoogleEarth) while working on a poem I'm calling "Seven Clouds":

The building to the far left, with the spiky wheels at the pitch of the roof, is the inner shrine. (from The Office of Resources and International Area Studies at Berkeley) 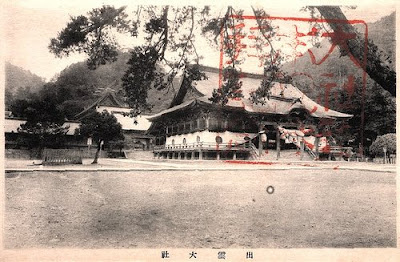 An old postcard. (from No-sword)

The enormous rope hung from the lintel
is kind of amazing.  This is at the entrance
of the more public, hence less sacred, building.
(From dissidence at Picasaweb)
When I was eight my family moved to Japan--we lived there till I was twelve, or thereabouts.  We never went to the far side of Honshu, which is apparently very different from the more urban side, the Tokyo side. Less urban, wilder.  I am brooding about this place, with its shrines and samurai dwellings and medieval castles and moveable gods.
Posted by Lisa B. at Sunday, February 08, 2009