Tonight, after a long day that was the end of a long week, we agreed we would go see Lincoln after we ate Mexican food like it was our job. Which we did, the Mexican food part. It was good, although maybe the time-sensitive nature of our dining timetable meant I felt a little stuffed as we drove down the road-equivalent of the backbone of the valley, State Street, wending movie-ward.

When we reached the theater, we hustled in, only to be told that the seating for Lincoln was LOW. There it was, the word flashing intermittently with the time: 6:45, replaced by LOW. 6:45 LOW 6:45 LOW.

"When it says 'LOW,' what exactly does that mean?" the historian queried.

So we headed home. On the way, I had a moment to ponder the better parts of our nature, I mean my day. Including this: 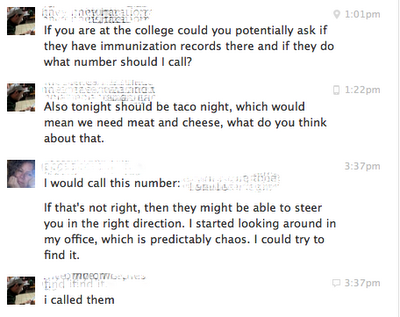 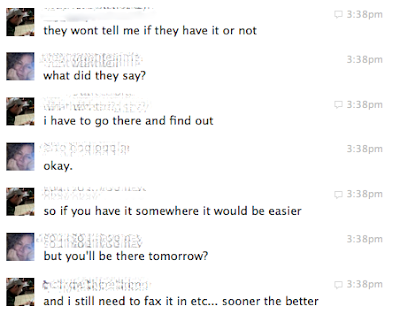 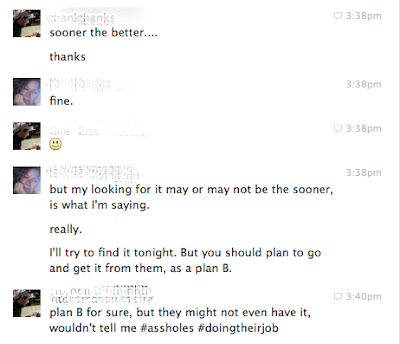 Question: How long will I have to be held responsible for stuff like this? Also, is it crazy that I kind of feel like immunization records is a weird thing for a university to be demanding? (Oh, spare me your public health lecture. I know. I'm just saying GOSH is all.)

Important subtext and a continuation of our story: looking for anything in my study is a fool's errand. I began hallucinating about all the places I might have put his immunization record. I summoned up its very image in my mind. Then I thought about where it might be: stashed in between two books on my Shelves of Chaos? In some secret file in my Filing Cabinet of Chaos? Perhaps I moved it from my study into my bedroom? And stashed it in between two books on my Auxiliary Shelves of Chaos?

This sort of search leads to a line of thinking that inevitably spirals downward, until I am castigating myself for all my moral failings. All of them. The Several Moral Failings of HTMS, or perhaps The Myriad Moral &c &c until I am ready to cry or huff around or cry and huff around or just quietly, softly scream.

And then I went to bed, where kept on hallucinating/summoning up the very image &c/dreaming about the Lost Record of the Immunizations of Son. There may have been Book of Mormon characters in there, I can't say that there weren't.

This morning, when I awoke bleary-eyed and self-reproaching, my son came up and said, "Would this be the thing they'd be looking for?" The thing in his hand was the immunization record.