Today, day two of the payback cold, I came home and crept into bed. Crept seems like the right word. It was past four and already the light was dimming. My eyes were heavy in the way that they're heavy when I have this kind of cold. At four, it was still two hours before I should take medication again. Day two of this cold is the day when, with any luck, I get through it by timing the medication so that each dose just catch the end of the previous dose, so it never wears off completely. If I do this successfully, then day three will be much better, and day four better than that.

So it was dim when I crept into bed and it was dark when I woke up. Just past five. Where was everyone? My son was downstairs. I was in the corner of the house, under blankets. In the historian's study, the lamp glowed. But he wasn't home. I turned it off and got back into bed. Just one more half hour before the next dose.

Jack Gilbert died today. I remember when I spent a month at the artist's colony in Vermont, the poets adored his work--"Monolithos," they breathed. "The Great Fires." I found used copies of all his books to that point in a lucky forage at Weller's. I read them quickly: these were poems that wanted to be read.

Just yesterday, prompted by a friend, I read this. Today, inching toward the very darkest days of the year, I'm glad to be thinking about Gilbert's beautiful poems. Here's one: 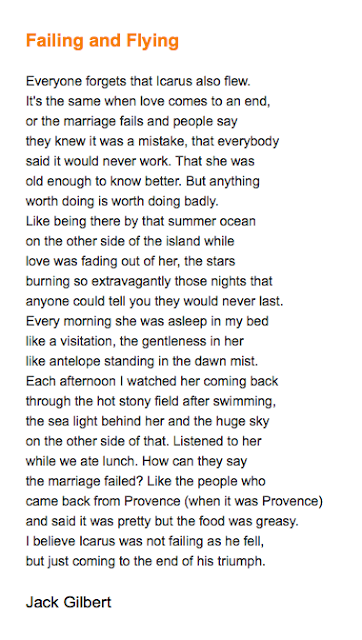 Email ThisBlogThis!Share to TwitterShare to FacebookShare to Pinterest
Labels: poems