How Tom Jones took over my life.

Have you met this guy? His name is Sir Tom Jones.

He used to be this guy, back in the day: 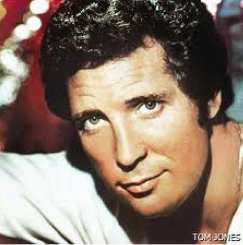 Let's just pause to contemplate the beauties of youth, shall we?

When we were in the UK a few weeks ago, I noted that he--Tom Jones, of "What's New, Pussycat?" fame--had become a judge on The Voice UK. Which piqued my interest, but only a little bit.

What I remember about 60s and 70s era Tom Jones was how resolutely uncool he always seemed. Big guy, handsome, strong build, tight pants, super wiggly--uncomfortably so--dancer. Shirts unbuttoned to reveal his handsome hairy chest. Sang songs like "What's New, Pussycat?" Which swings, okay, and is catchy in a kind of embarrassing way. But not cool. Too much of an entertainer. Too Vegas.

Counterfacts to this point of view:
Yet: So Vegas. So very.

Then came the day, recently, when this one song got stuck in my head. A song to which I knew maybe six or seven words, but the melody--if it was indeed a melody, and not snippets of two or more melodies from two or more songs that I was patching together--the melody, I heard it true, and insistently. And I heard it in the voice of Tom Jones.

What's that, pussycat? Why Tom Jones?

Whoa-oa-oa-oa, I cannot tell you. I never owned a single recording, neither 45 nor LP nor CD, of Tom Jones. Tom Jones I quite frankly disdained.  But there he was, singing in my head night and day. Why that song I cannot tell you. Maybe I heard it on some television show or movie?

Here's what I did to try to figure out what the song was:
Perhaps now is a good point to insert this fact into my narrative: I had decided that this quest was going to become a poem. So I also
Turns out that he had a slump in terms of popularity, late 70s into the 80s, although he generally did 10 weeks in Vegas a year--he was always popular there. His recordings mostly stopped charting, with a few exceptions. But then he signed with Interscope, and later did a Johnny Cash-style reputation renovation with a stripped-down recording called Praise and Blame, which he released in 2010. This recording, the people, is the first Tom Jones recording that I ever owned. I downloaded it yesterday.

I also may have to download mp3s of a few choice cuts I found in my Tom Jones research. What can I say--there are a few great ones. He has an indisputably fine voice, and there's something at least a little likeable about someone who keeps singing way past their superstar moment.

Also, due to a stray comment from an old friend on Facebook, I found this inspiring gem. Do not hesitate to listen to it, because it is choice:

Isn't that kind of amazing? How sexy are the two of them, anyway?

But what about my song, you ask? Well, today, I tried again in earnest with SoundHound. This was after singing the melody, twice, to singing son at lunch. It did not ring a bell with him, and really, why would it have? It was an artifact of my youth, if it even existed at all. So again I sang to my iPad like an idiot. And after a couple of tries, here's what it came up with:


Yep, that's my song, it totally is. What I couldn't stop hearing was the bridge, the part that begins "whenever I," which I remembered as "so look around" (hear how they have the exact same rhythm?). And here's a key fact:  Tom Jones never once recorded this song, so far as I can tell, and I would know, considering my new and impressive Tom Jones scholarship.

But in my mind, Tom Jones's version is way better than this, the original; better than David Cassidy's, who covered it, and better even than Dusty Springfield's version. Tom Jones sang the hell out of this song--in my mind.