It's the time of year when the temperatures begin to come down into the realm of the tolerable. This means that one can sit out on the terrace at work, where the students sit, plugged into their iPods, looking at their textbooks or waiting for their friends. It's where some of them sit to talk, think, and smoke.

After all these years of anti-tobacco indoctrination, no one looks at this as a harmless pastime. I grew up Mormon, and I never smoked. When some of my sons' friends have taken up smoking in their young adulthood, I have pestered them about it like any good mother would. Once, a good friend who smoked most of his adult life was standing outside my building at work, talking to a mutual acquaintance, holding his lit cigarette in one hand, his arm extended down and away from his body.

"When're you going to quit that filthy habit?" I said, cheerfully, though it was clear he was taken aback. (I apologized.) 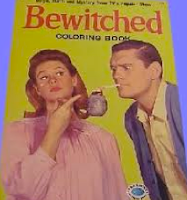 But I confess, there are times when the smell of tobacco smoke makes me nostalgic.  I grew up in an era when smoking was common in advertising and on television and in the movies. I remember, during my avid television watching during the 60s and 70s, seeing Dean Martin smoking on his variety show, and Bewitched's husbands (Darrens 1 and 2) and his/their boss smoking furiously. And my dad was an Air Force man. We lived on Air Force bases, on and off, until I was just about twelve. I remember summer afternoons, people sitting out on their steps talking, my friends' dads and moms smoking. And my Southern granddaddy was a smoker. As I remember him, he smoked slowly and meditatively.

So today, I'm sitting there on the terrace, talking to a couple of friends over lunch. They're talking about books and film scripts, and I'm chiming in. Next table over, a group of young men, almost all of them smoking. The sky is a little bit overcast, but it's light, it's noon. The smoke is visible and I catch its drift here and there, not enough to be oppressive, just that scent, that burning. It reminds me of my childhood. It reminds me of summer and warm afternoons, and it reminds me of Georgia, my mother's father, red dirt, rain every day and the humid, green fields. It reminds of my friends, those from long ago and those now, friends for whom smoke is or was a ghostly familiar, a companion, an intimate poison.

from Smoke, dir. Wayne Wang
This is Made by Hand, The Cigar Shop