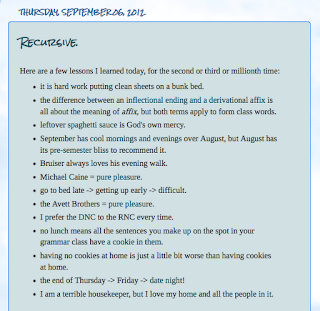 Yesterday, I posted this:

Today, I have been thinking about memory, about how posting (almost) every day (so far) in the year 2012 has had the effect of fixing little points--constellations--of memory. Or I hope posting every day will have that effect, anyway--because as I think about it, I wonder: will I see the words "it is hard work putting clean sheets on a bunk bed," and remember that we were straightening and cleaning and making beds because my brother and his wife and son are coming to town to help my niece--their daughter/sister--move back home?

And when I read "September has cool mornings and evenings over August, but August has its pre-semester bliss to recommend it," will I remember what it was like last night when we stepped out, and the moon was waning, and it was cool and late and we had just listened to Obama's speech, and after that, watched a big swath of Dirty Rotten Scoundrels? Which is why I commented that "Michael Caine = pure pleasure"?

It's hard to say what I'll remember, although maybe going over it again here, both inking over the sketch and supplying additional notes, makes it more likely. I hope--perhaps we all hope--that writing does something like that, at least for ourselves, if not for, what? posterity--makes what is fleeting more lasting.

For instance, while my son was helping me move some stuff out of a very tiny room downstairs, so that it could be more spacious--this was prior to the cleaning, in preparation for the guests--he stumbled upon boxes, boxes upon boxes.

"You have a ton of pictures," he pointed out, helpfully.

I already knew this. Today, I took the most brief look possible at the many boxes of photos before moving them, basically, back into that room in a more concise, edited arrangement. I found a sheaf of emails that I had exchanged with a friend who was in the Peace Corps, in the Dominican Republic. I also found a picture of my daughter and my niece up in Idaho, and a picture of my older son and his wife when they were either newly married, or just before.

The sheaf of emails was fully of chatty, daily stuff. For instance, I rattled on to my friend about how my youngest son--the one who was helping me with the boxes--how he and his friends used to have a small battery of retorts that they would use to respond to anything anyone ever said to them. To wit: "Prove it," "Why?," "How do you know?" and "do you have any evidence?"

I had entirely forgotten this episode from my son's youth, although now that the e-mails, tucked away in a box full of correspondence that I'm sure has many, many such riches, have brought it back to memory, I can remember it and how funny, and annoying, I thought it was at the time.

So now those boxes are stacked neatly in that room, holding their written and printed troves of my past, and my children's. And this blog: in its archives I have lain the daily tokens, neatly, haphazardly, which fill its capacious cabinet, and which I take out from time to time, as a tool for remembering.
Posted by Lisa B. at Friday, September 07, 2012