Today, I read this: 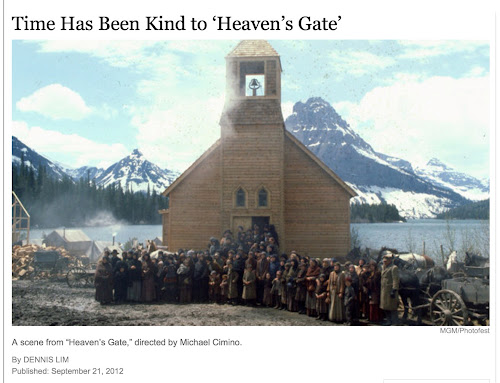 It reminded me of when the film came out long, long ago. I remember it like it was yesterday, because that was when I came to know of the perfidy of film critics.

While I'm knocking film critics, let me say that I find it unbelievably annoying when a film critic in a national magazine, or website, or wherever they publish film reviews nowadays, gets plot details wrong. If I can remember the details, enough to know that the reviewer got them wrong, then they should be able to remember them, am I right?

I haven't seen Heaven's Gate. So don't take my word for anything. But it pleased me endlessly to see this article, to think that the film would get a second chance and a reconsideration. What would please me more would be if that Newseek critic would apologize for his sheer effrontery, from long long ago. In fact, I would like there to be a ceremony for this kind of retraction. It could be an annual event, and there could be an official board to review the proposed occasions for this kind of egregious malpractice of the critical arts. It would right wrongs, redress grievances, and restore balance to The Force.
Posted by Lisa B. at Sunday, September 23, 2012