Feats of derring do and sprinkles. And icing.

A few days ago, I was at the grocery store buying this and that and also this: 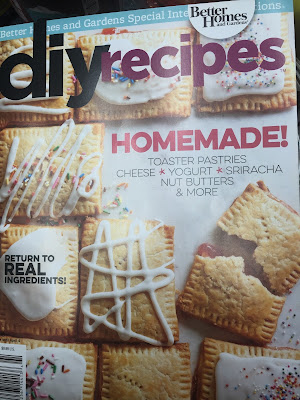 While I'm admitting things, I'll also admit that I was feeling a little blue at the end of the day today. I had gathered my wits to finish a report and to make headway on another report, and yet--and yet, my son is still moving across America and there is nothing, not one thing, that is going to change that fact. It's a good thing, I'm proud of him and excited for him, but I will miss him. In the hour before the dark, that's what I was feeling blue about.

Of course, to do that, I had to find the magazine wheresoever I had lain it. This involved roaming from room to room, and thinking about my personal failings and feeling bluer, mostly because there were no lights on, and where was that GD magazine?

So I turned on some lights, and found the magazine, and opened it to the Pop Tart page. It was a very simple recipe. A pretty basic pastry, with egg and a little milk, so also with more richness. Plenty of butter. Blueberry jam as a filling. A very simple icing. Sprinkles. I set to work.

The recipe said it would make six pastries. And though the only people living in this house are me, the historian, and for a very abbreviated time, my son, and Bruiser, I thought, Six is not enough. And doubled the recipe.


Will these pastries stave off loss? No, they will not. But they did stave off a pointless trip to Target, and they are delicious. And that, pretty much, is what pastries are for.
Posted by Lisa B. at Thursday, January 07, 2016