Recently, I realized that we live pretty much directly under a flight path for Salt Lake International Airport. I realized this, because I spent much more time outside, a lot of it looking up, evidently, especially in the mornings and the evenings. 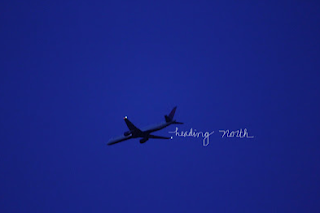 This reminds me of the time a few years ago, when I made an unfortunate wrong-airport ticket purchase on my way back to American from Scotland. This error necessitated the hiring of a driver to take me from Gatwick to Heathrow, which, by the way, is not as simple as it sounds. Pro tip: don't do that. I did, however, get this benefit: the driver, who knew the back roads of that small city, Heathrow, like a native, showed me how the planes stacked up, waiting to land. Even in the sick winter haze, I could see more than ten planes in the air, lined up, waiting waiting waiting for the signal to land.

This evening on my walk, I saw as many as four planes in a holding pattern, right above me. If we lived a few miles further north, it would be awful--so much noise and so constant--but where we are, we can see the planes clearly without too much engine roar. Holding holding holding, then each in its turn, surging forward. Then the next one, and the next.

I won't spell it out for you--that would be gauche--but this is a metaphor.

Well, hello. For better or for worse, I'm back.