When I was getting ready to go to Scotland--by which I mean "getting ready to risk thrombosis by sitting for countless hours on a transatlantic flight, God bless it for taking me to see my daughter!"--I charged up my iPod and the Historian's iPod, so that we would both have lots of music to listen to which would hopefully distract us from the clots possibly forming in our legs. While doing this, I confronted the shift in my iPod paradigm. A sketch: 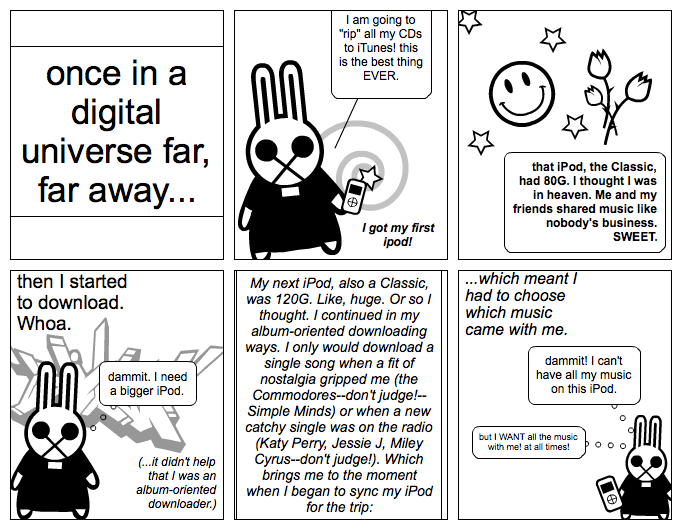 my iPod(s): a love story. by lisab

Well, suffice it to say that in the rush to leave town, I was not able to summon the sober wisdom of Solomon to decide what music should depart from the portable jukebox of my iPod, back onto the archives of iTunes. So that meant that I left a lot of new music behind, which was sad in retrospect, because the Jet of Thrombosis would have been the ideal setting for discovering that music. For getting comfortable with it.

Alas, no. It's true that at one point, I found myself listening to a Genius playlist of 80s tunes. Which had its comforts, and that's the truth.

Anyway. I have spent some time over the past couple of days assessing the contents of this iPod and removing some stuff. For instance, when I was in the car, listening to another Genius playlist, a Jack Johnson tune came up and I thought, I don't ever need to listen to Jack Johnson again in my life. That was a rather emphatic judgment, but I made it. Jack Johnson does not come with when me and my iPod are out and about, although if I ever reconsider my judgment, I know where to find him.

What's good is that I now have some new music to listen to. I told the historian last night that I hated this streamlining, paring away project, even though it's a project that presses on me, because it seems like preparing to die. Because he is empathetic and because he is kind, he didn't laugh. The thing about streamlining your iPod is that you can have your cake and eat it too, because you don't have to really get rid of things. You can rearrange them--some things are on the iPod, some are on one or another of your hard drives. What's harder is culling out the books to give away, or the clothes, or other non-digital stuff. When that's gone, it's gone, and your life may be sleeker, but it may also be poorer.

I can hear my daughter telling me things are not people, Mom. She is right. She is right. Well, my music is in much better order. Now, onto the the things.
Posted by Lisa B. at Saturday, June 01, 2013