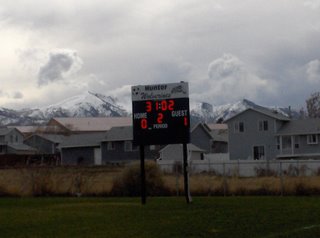 . . . why is it that recently I have heard several anecdotes about caves? one young woman in one of my classes said that the founders of the city of South Jordan lived in a cave at first; another young woman said that soldiers during WWII held dances in a cave near Wendover; tonight, I heard Lyle Lovett's cover of the Grateful Dead's "Friend of the Devil" (beautiful cover, btw), in which the speaker/singer says he "spent the night in Utah in a cave up in the hills"; and, as it happens, the first time I heard this cover was years ago, at the same time when I knew someone who had once lived for awhile in a cave near Santa Fe.

Okay, neither here nor there, but it seems like the spring weather, which is always unsettled, ignites upheavals in other atmospheres--like a memory equinox. Yesterday, I watched my son play soccer in wild weather way out on the west side (i.e., even further west than I live)--someone kicking the ball from midfield could watch the wind take it on a brilliant curve into the net, if the goalie wasn't mindful. (Though he was, and we won. 1-0 in region play--boo ya!) Meanwhile, the clouds over the Oquirrhs tumbled and tangled and spit a little rain. Reminded me of decades of Aprils spent watching soccer games in the same kind of fickle weather--of each kid at the lanky stage--of the same bits of sideline chatter--of me in my work clothes, rushing out of class or meetings to get to the second half of the game. Of who I was in those successive iterations of soccer mom. Of how that identity is just about over.

Today, when I left the house, with my prudent umbrella and bare legs, it was cloudy but not raining at that precise moment. Before I got to school, it was raining and gusting. When I left for home, sprinkling; when the historian arrived a half hour later, raining; as we drove to the dog park, sleeting; at the dog park, raining, gusting, sprinkling. The the sun broke through. My life no longer seems to me as volatile as it once did--storms passing through, leaving branches torn off the trees and the streets littered with leaves--but a memory of such storms blows through in the spring.

Jazz note: Monday night, we heard Flutology at the Jazz at the Sheraton series. Okay: everyone who loves jazz flute, raise your hand. No one? That's what I thought--well, too bad you weren't there, because it might have changed your mind, at least for the duration of the concert. Featuring Frank Wess, who played in Basie's Big Band, as well as two women, Ali Ryerson and Holly Hoffman, it's a three flute front line, backed up by a killer rhythm section of piano (Mike Wofford), drums (Victor Lewis, who was straight ahead and awesome, especially on a piece called "Rainesville"), and bass (local young guy, last name of Luty). It was way cooler than you'd imagine and even than I'd hoped. Judging from the review I linked to above, they play a kind of standard couple of sets--Thelonious Monk's "Straight No Chaser," Dizzy Gillespie's "Be-Bop" (written by Charlie Parker, I believe), and a bunch of other terrific pieces, several arranged by pianist Wofford. Holly Hoffman has serious jazz chops, especially in a stunningly soulful solo on "No Mercy." I thought we might end up leaving after the first set, but it was easily enjoyable enough to stay. A highlight of the series, even. Here is a picture of the stage minus the musicians (I was just not bold enough to try taking a picture of the band, even without flash as I did here, because what if the flash went off anyway, and the peoples were annoyed with me? Perhaps this blurry picture of an empty stage will give you nonetheless a "let's hear jazz on Monday night" feeling. I hope so.). 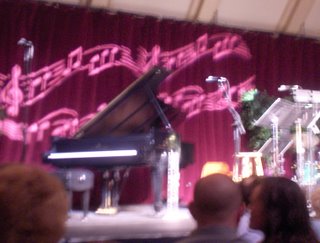