I am a shopping genius.

. . . if by genius we mean someone who shops a lot and buys cool stuff, and I think that's what we do mean.

Today I purchased a flatbed scanner, which is the culmination of a long desire. By which I mean, I've wanted a scanner for a really, really long time. Why? you may ask? So I could scan stuff, of course. Here are some examples: 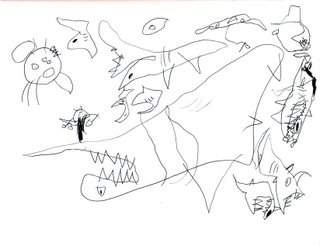 Carter, the historian's daughter's son, and therefore his grandson and mine, is three years old and has a big ol' crazy love affair with all marine creatures. We had lunch with him, his mom, and his brother Alex last week (pb&j, if you must know), and he regaled us with ocean creature talk. One thing we all agreed is that the historian and I must watch Shark Tales soon. "Then we can all talk about it," I said. "Or draw about it!" said Carter.

When I was in Scotland last--when Miriam, Princess of the British Empire, was born--my daughter and her husband were living in the countryside. It was beautiful out there, but it was pretty lonely.

See? The possibilities are endless, and I am ecstatic about this purchase. If you want to know, I will be scanning myself senseless this summer. (Well, not my self precisely--but you know what I mean.)

Teen boy squad update: a couple of weeks ago, my son had a Friday off from school, which meant that we started the weekend early, which meant that it was time to open the shed for the summer. This was what he said to me when I came out at 11:00 p.m. to tell him and the lads that they needed to be quiet--the neighbors must be trying to sleep, people had work in the morning, I had work in the morning. "It's just the first time of the summer," he said. But it's March! I said. Here's what summer looks like when it's April in the shed and everyone's watching Shaun of the Dead (note Bruiser impersonating a teenage boy): 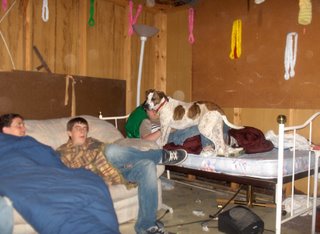