Okay, so yesterday, after feeling yet again wrung out by stuff at work, all the stuff I have to do, blah blah blah, the historian and I talked about our respective days and we came up with a Friday night date plan--go to Rubio's for fish tacos (something more truly vegetarian for t.h.) and see Glory Road, which I had seen but he hadn't and which I knew he'd find interesting and I'd enjoy again. Off we went.

As we neared a very busy intersection--Redwood Rd. and 70th South, for anyone familiar with West Jordan--we saw a golden retriever-ish looking dog. She appeared to be interested in crossing the street, although there were two women standing near her. I hope I hope I hope, I hoped to myself, that the dog belongs to them. That's because t.h. is a dog rescuer, and we were going out after a soul-wringing day at work, and if we rescued the dog, we would have a very different project on our hands. (This, by the way, is how I know that I am not as good a person as t.h.--if I had been travelling alone, I would have felt a pang at seeing the dog across a lane or two of traffic, and I would have hoped that the two ladies belonged to the dog, and I would have felt bad, but I probably wouldn't have stopped. The historian would have, and that, dear readers, is how we came to have Bruiser.)

So we hollered at one of the women to see if the dog belonged to them (hope denied), asked them to hold on to her while we drove across the intersection, in back of the strip mall, around to the road, into the other strip mall, and got the dog, who seemed nervous and disoriented, and maybe a little old. We drove to the neighborhood we thought it was most likely the dog had come from, and stopped four or five places to see if anyone recognized the dog. "I've seen a dog like that wandering around here before," said a nice woman who had a Jack Russell terrier inside. Another guy, chattier, a cat owner, said the same thing. Others had never seen her before--kids on skates, moms with strollers. A nice young man who had three dogs of his own said, "Looks like you got yourself a new dog."

We brought the dog home and saw that she and the Bruise-hound would be fine in the back yard, went to our movie, ate the fish tacos afterward, then went home. The Teen Boy Squad was there, seemingly completely nonplussed that there was a new dog in the yard. They named her Betty, which seems pretty good. Bruiser's curious about her. It's clear that the ecology of his world has just shifted. He keeps on giving her a good sniff-over.

Betty slept on the sunporch last night on a blanket. She settled right in. This morning we took her to the vet to see if she had a chip implanted (no dice), and made a flyer to post near where we found her. We've been talking over what to do if we don't find her owners. She has a very sweet face and good manners, and she's in very good health. The story hasn't got an ending yet. I'll let you know. 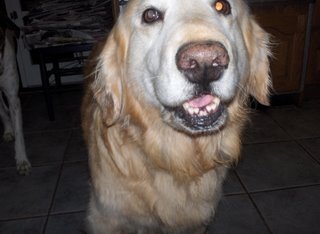