After a certain amount of reflection, I have a short list of items I would like to overthrow:
Our day started with a 5k at Murray Park, where runner son came in 14th overall, and 3rd in his age group (a guy passed him just at the finish--burn!). However, the race organizers held all of us hostage by holding a drawing for a huge pile of stuff before they awarded the medals. Oy! The fact that there were some electronics in the huge pile was the holding hostage part--also, if you placed, you might want your medal.

In a parallel event, college daughter went to help her dad, who is running for the State Legislature. They had a booth at the West Jordan 4th of July festivities, and also a float. The kids' friends also came to help, which I think is pretty great of them. "Helping" included sweating in the booth and hurling candy at the crowd from the float. College daughter told me that the booth looked like something had swallowed her dad's name and vomited it back up in red, white and blue. Sounds persuasive!

After we were released, finally, from the race/drawing/awards/tail end of the Murray City Parade, which included some float bellowing "I'm Proud to Be An American," we drove home, runner son got a shower, then off to work he went. I fell into a sleep-deprivation nap that lasted three hours. After that, I went off to participate in that all-American activity, the 4th of July summer clearance sale. Then we went to dinner and college daughter and I went to a movie.

There was a time when I would have baked a cherry pie or something. There might have been a barbeque, and we might have sat out on the lawn watching the neighbors lighting up their fireworks in the street. All good, certainly. Maybe next year. This year, I'm feeling just a tad less celebratory. But there was this to celebrate, after the race: 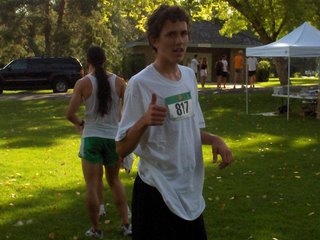