My men and my women:

On Sunday, I noted the faintest dust of snow drifting lazily down and asked myself: shall I go out or shall I stay in? and more importantly, shall I bake? As it turned out, I went into the wild world to try to find fancy dresses for granddaughters, and came back sort of wasted. But in the meantime, an idea set my head on fire (sorry, just now watching Glee) and the idea was this: apple turnovers.
Maybe I looked at Tartelette, and there was a recipe for crazy mille feuilles, along with a rough puff pastry recipe, whoa. Maybe it was that there's a bucket of apples in the garage that came from our very own trees. 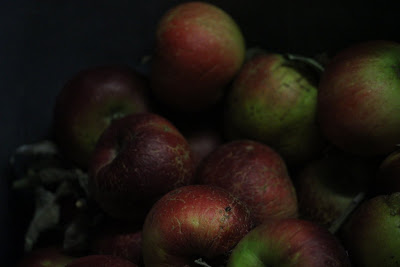 Maybe it's that every weekend of late, we say "Let's make applesauce!" and then we never do. And maybe, periodically, I need to wrestle with some complicated pastry to prove that pastry is not the boss of me. I don't know.
But that rough pastry recipe called my name. And the context in which it called my name was the turnover.
I have some history with the apple turnover. I think you can still buy those turnover kits made by, what, Pillsbury, in the refrigerator case. Which I have done in the past. In the past, when I was a teenager, I may or may not have made some of these turnovers for a crazy church event where girls brought a picnic something or other and boys bid on the picnics? Can that be real? I think it was, and I'm pretty sure I had some vaguely French-slash-bohemian fantasy that also may or may not have involved some kind of unusual cheese. Okay, closing that memory up for good, and moving on. Where was I? Apple turnover, right.
So, this pastry. After you make the basic dough, all puff pastry requires multiple rollings out, foldings into thirds, rests in the refrigerator, then more rolling out, etc. This is what builds the layers. For classic puff pastry, you make a square of butter and enfold it in the dough, then roll it out, etc. But with rough puff pastry, you incorporate the butter into flour, as if you were making pie crust, add water, gather it into a ball...and then you roll it out, fold, rest, etc. Does this rough version sound easier than the classic? Not really, am I right? Are you even still listening?
Well, let me say that upon the first assemblage, the dough was very rough looking, and I questioned indeed whether it would be puffy at all or whatsoever, or if instead it would be a tough, horrible catastrophe of a dough that would make me sad that I had ever had the apple turnover idea overtake my mind like a fire. But guess what? After the second rolling out, it started to kind of look suave and as if it might contain the possibility of puff. 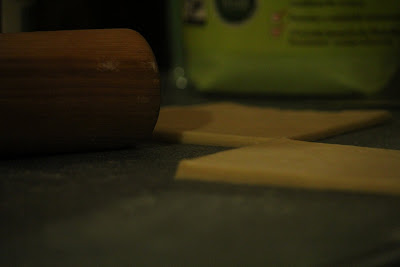 (but flat, right? can you believe that the above would ever expand into delicate and sophisticated layers? me either, to tell the truth.)

But after the third rolling out, I was all, let's get the apples! 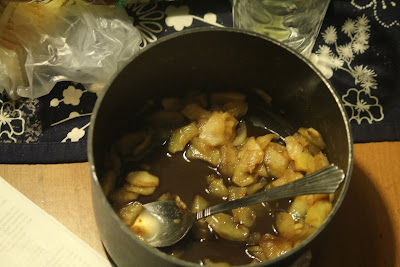 And here's how it all turned out in the end: 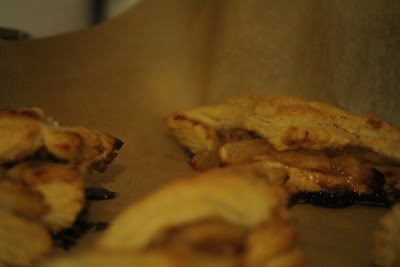 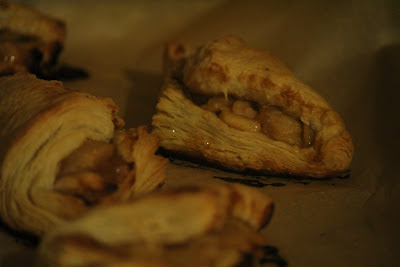