These things are an abomination before the Lord.

Otherwise, our little road trip to CA was a smashing success, and here's why:

Running son did a bang up job running a very difficult course at the Footlocker Regional cross country event, Western Region sector. Here he is: 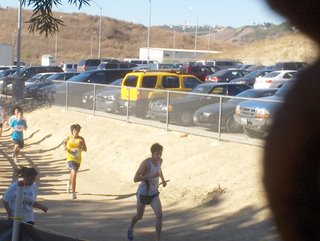 I'm sorry to say that he's the shadowy one in the foreground. It's a damn miracle that he's in the picture at all--I did a lot of prep work setting up my shot and when he came into view, I forgot that I wanted to take a picture, because I was yelling, "Go, Running Son, Go, Running Son, Go!" etc.

The course was extremely hilly at Mt. San Antonio College, or Mt. SAC, as they like to refer to it. My youngest sister actually ran this course when she was a high school runner. I was grown and gone, so this was news to me. Anyway, even though R.S. should have had the advantage of "training at altitude," as they say, lots of the runners from CA who "train at sea level" were damn fine runners. All in all, it was quite an interesting deal, to see how freakin' fast these young people are. When the seeded female runners lined up, the announcer pointed out that there would be "130 flying girls," and he was right. The fastest female high school runner from Utah, Kim Quinn, who is dang fast, came in 13th, not qualifying for the national finals--and she's fast! Really fast!

The historian and I left town on Thursday evening and drove to Cedar City. We got up in the morning and drove to Walnut, CA, near the San Bernardino mountains. We got in at about 2 and checked into our hotel where there were about a billion high school runners and their chaperones. Apparently, however, high school runners are a fairly serious bunch when they've got a race the next day--there were little to no shenanigans. We had Mexican food in a strip mall (the best kind) and marveled at all the signs written in Korean in Walnut. Kind of a trip.

The next morning was the race (see above). Then we drove to the Claremont Colleges to check them out. That was interesting and cool. Scotland daughter considered going to Scripps. Here is a gateway into the courtyard of academe at Scripps: 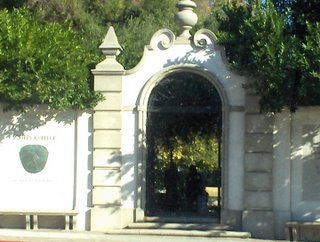 Seems pretty good to me. The historian ran across a job announcement for an academic vice president at Scripps. I say he applies, gets the job, and we get to hang out in this type of swanky yet serious educational environment. Or we could stay at the community college. Probably it's sixes.

We gassed up and drove all the way to St. George. I would like to tell you that we were edified by the sudden magical oasis in the desert that is Las Vegas. But we were not. I continue to loathe that town, and there were traffic issues and road work to underscore this point. Nonetheless, we passed through these trials (note to self: add "Las Vegas" to "These things are an abomination before the Lord" list), and we made it to St. George where we considered our dining options and ate at JB's, site of the cold french fries debacle. However, the Jazz did pull off a thrilling win against Seattle, so all was well.

We had a wonderful time. A road trip is a chance to reconnect with the person you're driving with. It had been years since we'd driven to the L.A. area, a trip I used to make a lot when my folks still lived there, and I still love all the landscapes you pass through to get there.

When we got back, the dogs were ecstatic to see us, and the house was none the worse for wear, or only barely the worse for wear. Let it be noted that Bruiser and Betty have both developed a hunger for knowledge, or at least so it appears, as while we were gone, they started to eat some books.
Posted by Lisa B. at Sunday, December 03, 2006