I don't have time for this nonsense.

Well, actually, I do--I have all the time in the world, apparently, for just about any kind of nonsense--but I'm just saying I don't because it sounds commanding. I've tried to get the historian to practice saying this, because I feel he could use this expression in all sorts of meetings where I feel confident nonsense is going on routinely. No dice, though. He's not the kind of guy to reduce things to a snappy catchphrase. More's the pity--no one would be expecting it from him.

Ah, well. A few updates for ya:

1. The poem-a-day-for-a-month project seems to be finished. I have three more poems in the works, which I will write and post, but as of now I have 23 poems, which I think is pretty darn good for 30-ish days. I'll be working on them for a long time to come, I bet--or maybe working off them is a better way to put it. Next time you see Dr. Write, congratulate her on her batch of poems, among which are some stellar sonnets and other assorted excellents.

2. The historian harvested our grapes and we have made juice of them. 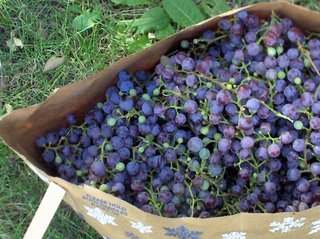 The below is a photo of the historian in a tree, which is where our grapes actually grow, since we've never quite pruned them, actually. We always say we're gonna, and then we never do. Even worse, however, is the fact that we had many, many more grapes up in the tree, but we let them stay on the vine too long and the birds got 'em. I'd like to say that we're philosophical about the birds eating the grapes, but we're not. We curse the birds for eating our grapes. Damn birds! (This is not to mention the satanic yellow-jackets that decimate our precious little table grapes. I vow to hunt down their nest and figure out a way to make them go away without getting stung to death. Surely there's an internet site about that?) 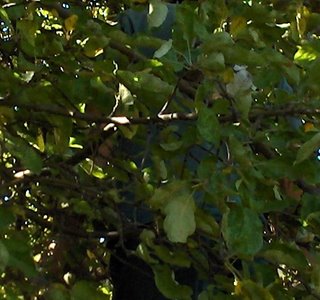 3. Last weekend at the Juan Diego Invitational cross country meet, running son came in fourth, ran a very fast first mile (4:38), and overall had his best time for a 5K ever. Region is next Monday, State the week after that. All of you keep running son in your hearts and hope that he will have two surpassingly great races. 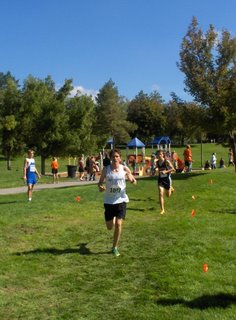 My sister and brother-in-law will be running the St. George Marathon this weekend as well. Cheers to them, and great luck in qualifying for the Boston.

4. The historian and I will be seizing fall break by the horns and taking a little trip to Wyoming, where we will visit our friends George and Maureen. G & M, Inc., have some property, The Bad Beaver Ranch, where there's a stream and some llamas and a couple of dogs and lots of cats. Probably also some cougars--I'm definitely hoping for cougars. We'll be driving through Idaho and into Yellowstone, then off to Cody and beyond. I'll have a full report for you when we get back.
Posted by Lisa B. at Wednesday, October 04, 2006