Dispatches from my hermitage. 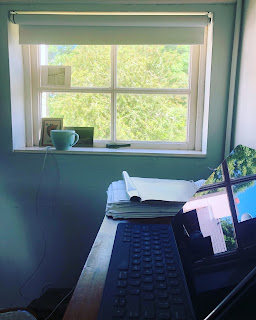 Also, the Irish butter I have on hand is excellent.

2. I am feeling it, the way my time does not coincide with the time of most of my people. I wake up to a group text that has fifty-six updates. I text someone and know that they will not see it for half a day, never mind the fact that maybe I shouldn’t text them at all because what if they are a light sleeper? And have some sort of haptic buzz (pretty sure that’s not how haptics work) set for when a text comes in? And my silly and inconsequential text wakes them up at 3 a.m. or 4 a.m. or some other ungodly hour?

On the other hand, I am in the same time zone as Scotland daughter, which means that we can chat at will, and it is great. BUT: she has a job and so, boo, I guess I shouldn’t bother her while she’s at work, I GUESS.

3. I am a discreet observer of life at this little country homestead. Right now, for instance, I can hear children’s voices. The other day, the two mules who live here went galloping by one direction, then galloped back the other direction. Chickens have a whole conversation of their own. 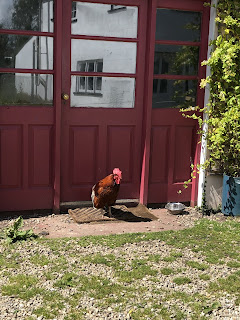 4. I wrote a draft of a poem today, who knows what to make of it? not me, certainly.

and possibly some other trash. Which I will keep to myself.

6. No television feels weird. Okay, but weird. Keeping it very quiet here. Which means I can hear all of the lovely sounds—the songbirds, the dog colloquy, the mule gallop, tractors huffing on the road, and so forth.

8. I used to say—I had this conversations with The Historian the other day—that in a democracy, it was one’s obligation to be an optimist. (And all that that implies—to do the work to bring a hopeful future into being—it’s not just the believing that will make it so.) Now, I’m thinking about this and this and this as I’m working on a poem (different one than dispatch #4 above) which may or may not be too fragile a vessel for all that thought, but I’m not done with it yet. It may yet become sturdy enough.