Middle of the middle.

Here we are, just past the Fourth of July, with its blaze and hot dogs, its smoke and ambivalence. At least that's how it was for me. Luckily, I got to see my dad during the day, and we--the historian and I--went downtown to see a movie in total spontaneity. Also, ate pizza. The fireworks in my neighborhood went on well after midnight. Bruiser is an old man now, and is not a fan of the neighborhood fireworks. We postponed our walk till we thought it was all over, but no: one family had their entire ranks huddled in the dark on their parking strip, and set off a few rockets in the street. Green and white sparks fountaining up. We were maybe a hundred yards away. Bruiser drew up short, and looked back at us, as if to say, Really? REALLY? And we were all, I KNOW. When the family saw us, they held up their next conflagration until we had passed. Which was nice of them.

In my current roster of democratic (small d) actions, I include the following: 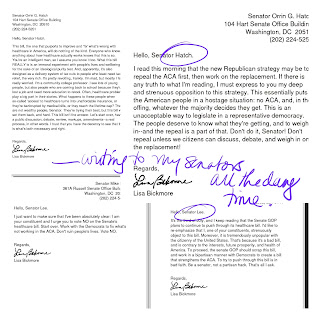 Eve Ewing talked in that podcast about 'desire-based narratives'--rather than writing about oppression and focusing only on what's terrible, thinking about, listening to, what the people involved want, what they long for. That seems small d democratic to me. An idea to conjure with.

It seems like our current predicament--what Danez Smith said called for them, all of us, to pack the apocalypse backpack every day (what's in yours?)--is going to last for awhile. I admit that I hoped that the appointment of a special prosecutor would be a hero on a horse situation, and even though I knew better, I hoped it would come quickly. But nope. (Or, in my favorite Twitter hashtag, which I think I personally devised, but maybe not: #NOPE.) 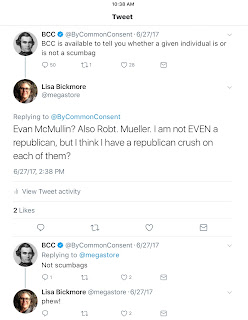 Anyway, the fire, and the fireworks, are ongoing, and we--I--must figure out not only how to endure, but how to engage, in a way that might possibly be productive. And that's how I'm spending my summer. Also: packing my apocalypse backpack.
Posted by Lisa B. at Thursday, July 06, 2017