Is 'one billion' an exaggeration? It feels real.

This weekend I managed to set aside some time in a private place to look at the writing I have done over the past couple of years to see what's there. I know that I am very lucky that I can do this: that I could secure that private place for a couple of days and nights, that the people I love support me in this. 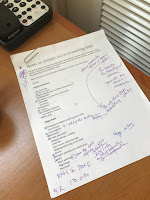 I printed out several swaths of poems--for the last year, I've written a poem a day for several months--five different months--and of course, there's April (the cruelest month) and the poem a day I've written with Dr. Write. All of this. I printed it all. Trees quaked at the prospect.

I read through all these poems. All of them. I made notes on the poems themselves and I made notes about what I saw--what connected the poem, what threads and strands there were. I had had some intuitions prior to this retreat, and I tested them, to see if those ideas of what an arrangement of these poems might add up to were borne out by what I had. 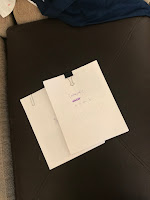 I thought about big revisions, and smaller ones. I identified what poems were close to being finished (a handful) and which ones needed work (most) and which ones would require architectural overhaul (another handful).

And then I assembled an order.

All of this is a draft.

Now, I can work through this draft manuscript poem by poem. And then I will see what I have when I'm through. 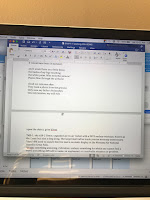 I'm optimistic that I might be able to work through what I have, poem by poem, by mid-summer. And then I'm hoping to look at the sequence I've made again.

This process felt, and feels, entirely methodical to me. Procedural, even. Although there's a part of putting something like this together that feels alchemical and intuitive, there's another part that is compositional and even rhetorical. Thinking about how the terms of an argument--made by poetic means, but an argument--work themselves out over a sequence of texts. Thinking about sequencing. Thinking about balance. Thinking about emphasis and transitions. This is why the quiet was so important to me--why I needed to be undistracted. I don't like thinking about how easily I feel distracted by the ordinary components of my life. That's something I'd like to work on. Maybe I'll get it right when I'm dead.

I love the moments, when I write, when I can feel something coming together in a way that feels magical--when I feel the small thrill of gathering the threads of metaphor and image and they add up, they do something more. This is, in fact, not the biggest part of writing for me, at least not usually. Obviously, I love it when it happens. But I also love this methodical part. I love the thinking part and the considering part. It is deeply satisfying to me, even when I know--as I know now--that there's nothing whatsoever final about this stage of the work. That this is, in fact, an entirely provisional moment in the composition of what I hope will be, sometime, a new book.

A couple of days ago, I reminded myself that I don't need to be in a panic about this. That I can take my time. This idea--that I have time, that I can take my time--comes in and out of focus. Because, really, no one knows how much time she really has. (We're all going to die.) But I'd like to do everything--everything!--in less of a panic than I have been doing things as of late. Because doing everything in a panic is a terrible way to live. To make art, to make dinner, to visit one's family, to work, to write: panic is a terrible atmosphere for any of this.

Panic, I renounce you. Get thee behind me, panic.