I was looking for a book at The King's English bookshop--The Information: A History, A Theory, A Flood--by James Gleick. I wanted to give it as a gift. Anne H. The Great helped me--she looked it up, although it wasn't on the shelves. She told me they could order it, and then mentioned that Gleick had a new book out as well--on time travel.


Nowadays we voyage through time so easily and so well, in our dreams and in our art. Time travel feels like an ancient tradition, rooted in old mythologies, old as gods and dragons. It isn’t. Though the ancients imagined immortality and rebirth and lands of the dead time machines were beyond their ken. Time travel is a fantasy of the modern era. When Wells in his lamp-lit room imagined a time machine, he also invented a new mode of thought.

Why not before? And why now?

I was talking with my son about his dissertation project, as he planned and brainstormed the structure of this complex piece of research and writing. He's talking to a musician, who has played with everyone and is story-laden. This man, my son hypothesizes, offers a counter definition of what a musical education might look like.

How will he construct this narrative, which is, at least in part, clearly not his alone? Will he write with his co-investigator, and what might the with look like in this case? How will he organize the piece, when his method is critical narrative, and the co-investigator is twice his age, with what might be understood to be a surplus of story? What ideas could he use to frame each chapter.

"I'm actually thinking about time travel," he said, with a self-deprecating shrug.

We have a group of grandsons who are wizard video makers: they make video essays about their obsessions, critical and speculative investigations into their favorite stories, stop motion animations, and sometimes just straight up narrative films. I was showing some of these films to another couple of grandsons, including one that was a self-defined lo fi time travel story. In this video, the time machine in question was a tricked out toaster, which took the traveler hurtling into unknown and uncontrollable future destinations, and just as disorientingly into the past.

I've lately been thinking about the holidays as a time machine, the hurtle-y, lurch-y kind, where you're taken back into a past of ancient battles with long ago laid down weapons, or into a future where nothing feels certain. Sort of like Bill and Ted's Excellent Adventure, but more melancholy. Sometimes, even, this time machine takes me briefly into pasts that feel lovely, like the Christmas our three oldest all got bicycles and I tied ribbons around each crayon in an entire box, and hung them on the tree, and and we painted the living room the palest, glowiest shade of pink. Possibly, not all of these happened the same Christmas, but remembering all of it feels like a shadow box of happiness, one I can look into, but where I may not stay.

This year, I found this recipe card, written out for my by my mother decades ago: 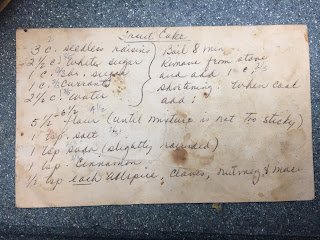 It is my grandmother's recipe. I have made my own adaptations over the years--I use dried fruit instead of candied, for instance--but when I bake it in my own house, cut a slice and put it on a small plate, and take a bite, I feel like I am eating my own past.

I think that longing for the past is a kind of sickness.

That said, sometimes, when the sickness visits, there is nothing but to lie down with it, submit to it, until it passes.

Last night, we saw fireworks in the sky. In the murky air, flashing flowers, their petals falling in bits of ephemeral fire. After midnight, we took the dog out for his last walk of the night. A neighbor, part of a big family that likes to gather in epic numbers for holidays, called to us from across the street. "Happy New Year, neighbor!" We returned the greeting and walked on.

Some of our neighbors have already taken down their holiday lights, including one house that I especially liked, because there were purple and pink lights in among the blue, red, and green. I was sorry to see them gone. I was kind of counting on them being up a little longer.

And now it's the first day of the new year, and so concludes this year's episode of the serialized narrative The Holidays: An Annual, along with the episode 2016, latest installment of The Years of Our Lives. Today, two sons are on their respective ways home, going in opposite directions. The sun is out. Maybe in a day or two it will snow, and the particulates in the air will come down with it.

I'm here, writing, in my chair. This moment, right now.

Why not before? And why now?