From the Lonely Planet Guidebook for Shaanxi: 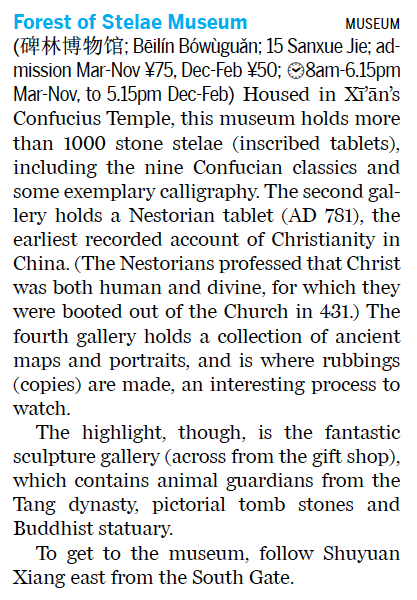 To see a library made of stone: yes.

We wandered through the galleries. Some of the tablets were under shelter but otherwise open to the air and elements. It was warm but not sweltering.

There was a time when people had touched the tablets so much that they were black. There was a time when there was a big earthquake, in the 1500s, and many of the largest and most important stones were broken into pieces. A scholar made smaller stones to fill in where the text was broken. In those galleries, it is as if the tablets are pages of a book. There were times when the center of power shifted, and the texts were lost to the "wild suburbs"; there were times when they were gathered together. The Nestorian stele was buried for centuries before it was found again.

It is a miracle, is it not, that any library survives, no matter what its texts are made of?

I suppose that a scholar would be able to look at the tablets and know things like the era, and the calligrapher, and the carver, and the nature of the text. The interpretive material was intermittent, so we could discern some of this. Not all. We could see, by the sweep of a cursive calligraphy for instance, that here we had entered a different period; by the minuscule, exacting characters, that perhaps this was a legal text. Each of the galleries presented its interests and its longeurs. We moved quickly sometimes, and lingered at others.

At the end, my son and I talked about faith on the steps of a gallery while we waited for the historian to finish his more deliberate examination. There were birds, and their song. A thicket of pillars with carved finials stood in orderly rows to our left. Stone is not eternal--it is susceptible to human touch and the earth shifting and burial and weather--but it feels eternal. Its breath is cool and unhurried. It speaks and it keeps its counsel.