1. Watching a really dark western during the run up to Christmas. The historian and I have been thinking about watching Deadwood for quite a long time. Perhaps because of our excellent run of binge TV last summer, we were ready again for something. So we bought a season on Amazon and have been watching two a day for the last week. We have two more episodes to finish. Its pluses:


There are more baddies than you can shake a stick at. When Raylan killed a Sioux in a particularly brutal scene, I turned to the historian and said, "I don't know if I can keep watching this if it turns out I hate everyone." But it's such a good show, the characters keep surprising you. And the writing is amazing: the most scruffy, profane almost-Shakespearean dialogue possible to imagine.

I messaged my son's friend, who loved Deadwood and even let us hold on to his DVDs until it was ridiculous. 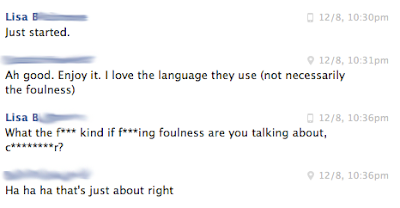 I suppose I ought to note that I have not yet watched one actual Christmas movie, for whatever that's worth.

2. Getting your Christmas tree! Obviously/finally.

Oh yes! There will be a new cookie! and I will blog about it!

4. Getting the grading done. (Obviously/mostly.)

Email ThisBlogThis!Share to TwitterShare to FacebookShare to Pinterest
Labels: recommendations